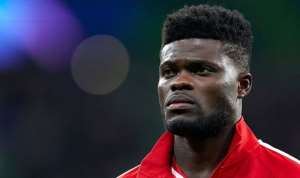 French Ligue 1 side, Paris Saint-German have reinforced their interest in Ghana midfielder Thomas Partey, according to report in France.

Partey, 26 has been a target for top European clubs this summer following his impressive season with Atletico Madrid.

However, Arsenal has been touted as favourites to sign the energetic midfielder.

Gunners manager Mikel Arteta remains a key admirer of the highly-talented Ghanaian and will table an official offer after the coronavirus shutdown.

The virus outbreak and its subsequent financial impact has stalled move to sign the in-demand Atletico Madrid midfielder.

But after failing to sign the Partey last summer, the Ligue 1 Champions have reignited in the midfielder.

Partey's clause stands around £43.5million for a player who has bagged 15 goals and provided 12 assists in 174 games for the Spanish giants.

However, according to RMC Sport, the Sporting Director of PSG, Leonardo is closely monitoring the situation.

At the moment, the African has a contract until 2023 with Atlético but powerful suitors.