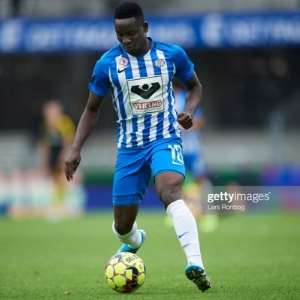 The forward who is contracted to Belgian giants Anderlecht is spending the 2019/2020 football season on loan at the Danish club to ensure he gets to play regularly.

Following the resumption of the campaign in Denmark after more than 2 months break due to the Coronavirus (Covid-19) disease, the former Asante Kotoko forward was called into action on Sunday to feature for his Esbjerg fB side.

Dauda Mohammed displayed excellent form as he operated from the wings. He terrorized the Aalborg BK defense with his pacey runs and direct attacking plays and was hugely involved in the move that resulted in his team equalizer.

Yuri Yakovenko scored for Esbjerg fB on the 67th minute but it was unfortunately canceled out by an equalizer from Soren Tengstedt on the 83rd minute as the host was denied 3 points at the Blue Water Arena.

Dauda, 22, lasted the entire duration of the match and finished with a rating of 7.2.

He has made 16 appearances this season for Esbjerg fB and has two goals to his name.