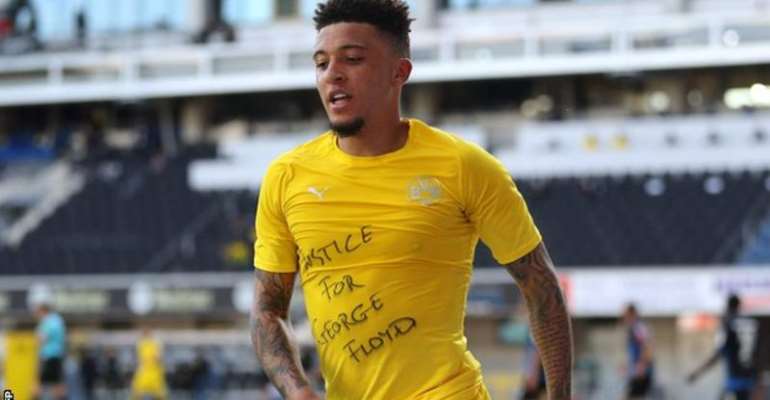 England forward Jadon Sancho was among a number of sports stars adding their voice to worldwide protests against racism on Sunday.

Protests have been held after George Floyd, an unarmed black man, died while being restrained by Minneapolis police.

Sancho unveiled a 'Justice for George Floyd' T-shirt after scoring for Borussia Dortmund against Paderborn.

Sancho, who scored a hat-trick as Dortmund thrashed Paderborn 6-1, was shown a yellow card for the gesture.

Sancho later wrote on Instagram: "Delighted to get my first career hat trick, a bittersweet moment personally as there are more important things going on in the world today that we must address and help make a change.

"We shouldn't fear speaking out for what's right, we have to come together as one & fight for justice. We are stronger together! #JusticeForGeorgeFloyd."

Floyd died in police custody on Monday after white officer Derek Chauvin kneeled on his neck for almost nine minutes to pin him down.

Chauvin has since been charged with his murder and sacked.

Underneath a video of a young black girl asking why she is treated differently to others because of her skin colour, a "heavy-hearted" Williams wrote that she was "lost for words".

Teenager Coco Gauff, who had a fairytale run at Wimbledon in 2019, urged her Twitter followers to "demand justice for George Floyd".

The 16-year-old posted the faces of black Americans who died in recent years at the hands of authorities or white fellow citizens, asking: "Am I next?"

Liverpool striker Rhian Brewster wrote a lengthy post on Twitter: "This is way deeper than just pointing out who's staying quiet and whose speaking up."

Brewster, who has previously spoken about the racist abuse he has suffered, continued: "For years and generations, we've been screaming out for change and to be heard, yet the pain continues.

"We don't want special privilege. A level playing field is all we have been crying for, forever.

"Hear us. #BlackLivesMatter."
Vanessa Bryant, the widow of basketball legend Kobe, shared an image of her husband wearing an 'I Can't Breathe' t-shirt.

"My husband wore this shirt years ago and yet here we are again," she wrote.

Formula 1 champion Lewis Hamilton criticised those in his industry for not speaking out.

"I'm one of the only people of colour and yet I stand alone," the Briton, 35, wrote on his Instagram story.

"I would have thought by now you would see why this happens and say something about it but you can't stand alongside us."

Akufo-Addo Is The Firm, Stable, Proven And Competent Captain...
12 minutes ago