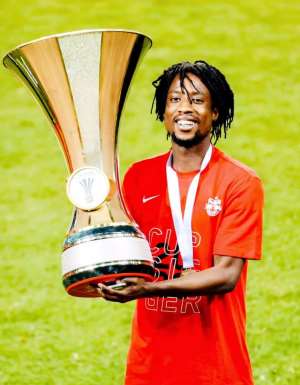 Ghana midfielder Majeed Ashimeru has expressed his delight after finding the back of the net to help Red Bull Salzburg defeat Austria Lustenau in the finals of the Austrian OFB Cup.

After close to 3 months of no football action in Austria, the sport finally made a return on Saturday as Salzburg and Lustenau fought for glory in the OFB Cup at the Worthersee Stadion.

Following a masterclass performance from the Red Bull side, they eventually emerged as 5-0 winners over their opponent.

A goal from Majeed Ashimeru, plus equalizers from Dominik Szoboszlai, Noah Okafor, Sekou Koita and an own goal scored by Dominik Stumberger ensured Red Bull Salzburg was crowned Champions at the end of the entertaining 90 minutes.

In a Twitter post after the celebrations, the Ghanaian international has appreciated fans for the support while noting that he is elated to have scored in the big game.

“Thanks to you all for the love and support. Big win and happy to score”, he posted.

Ashimeru and his teammates remain top of the Austrian top-flight table and hope to lift that title at the end of the season as well.