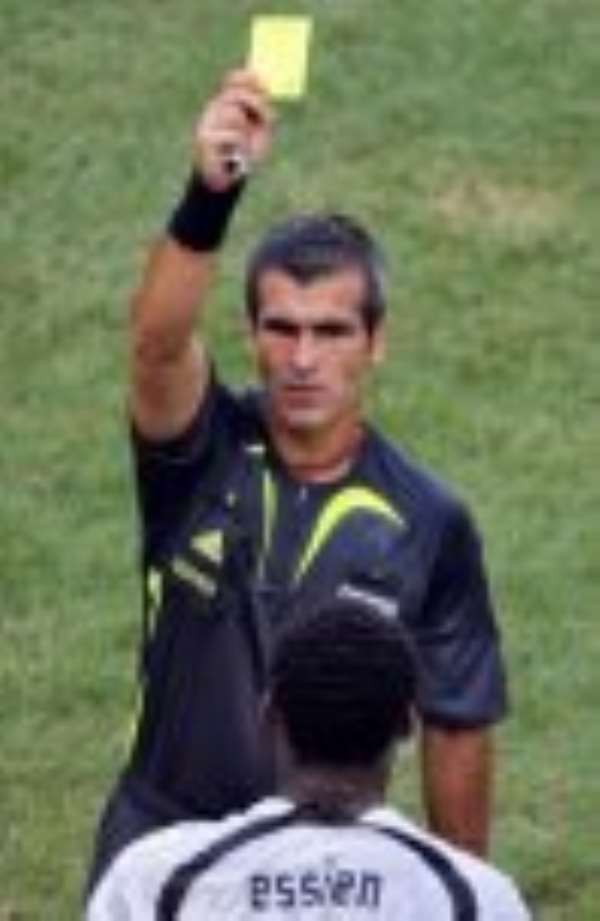 BERLIN (AP) -- FIFA is pleased players and spectators have noticed World Cup referees producing plenty of yellow cards for sliding tackles and reds for elbowing. The message is getting through.

After a slow start, referees had dished out five red cards, including three in Saturday's 1-1 draw between Italy and the United States, and 11 players had received two yellows after the first half of the 48 group matches.

ADVERTISEMENT
The Italians finished with 10 men and the United States played almost the entire second half with nine.

Angola, Australia, Ivory Coast, Japan and the United States have had gripes with refereeing decisions in Germany. But FIFA communications director Markus Siegler said the general standard of refereeing had been solid.

"If you count the number of red and yellow cards ... it's in proportion," he said.

Before Sunday's games, referees had handed out 136 yellow cards and 10 reds in 24 matches.

Daniele De Rossi received a red card and was expecting a harsh sanction for elbowing U.S. forward Brian McBride's face as he jumped for a header in the 28th minute.

"Yesterday, we had a rather ugly scene, the character of which was one of the issues addressed before the World Cup," Siegler said. "A phenomenon we're seeing increasingly with headers -- people taking a run up, using their elbows to leap higher. This can lead to injuries.

"This was correctly identified and appropriately sanctioned."

The disciplinary committee was deliberating on the penalty for De Rossi.

Uruguayan referee Jorge Larrionda sent American Pablo Mastroeni to the locker room in the 45th minute for a studs-up tackle, the American midfielder later claiming the challenge would rate only a yellow card "anywhere in the world."

Two minutes into the second half, U.S. defender Eddie Pope got his second yellow card of the game for a tackle in which he got the ball first, but still took down an Italian.

"Entering this World Cup, I think there was a real theme that they were going to be very harsh on players, and I think they have," he said. "The cards are excessive, I believe. It's just too much in all the games. It's taking good players out of games."

Arena said he'd never seen a match with so many red cards. It was only the fourth time at a World Cup that three red cards had been issued in one match.

"Fouls are being punished too harshly, without warnings. A foul sometimes is just a foul, it's not a yellow card," he said. "I think it's just gotten excessive in the World Cup."

The yellows were in accordance with a pre-World Cup stance against cynical fouls on attacking players.

Siegler said the focus on specific rules should not be misinterpreted.

"They're not new. The point is, the World Cup is the largest platform, the largest display case for football, where the best referees are in operation," he said. "We have to show consistency on the basis of the rules of the game. They have to be applied in the way we'd like them applied around the globe.

"That's why one has to be prudent about interpreting these things."

As for a FIFA investigation into Australian gambling, Siegler said all bets are off.

Nobody could stop players having small bets between themselves, as long as it did not develop into "organized, professional or institutionalized betting," said Siegler. "Then it would become an issue."

After a 3-1 victory over Japan, midfielder Tim Cahill revealed some teammates had bet on him to score Australia's first goal ever in the World Cup, and that backup goalkeeper Zeljko Kalac was the unofficial bookmaker. Cahill scored the first two.

A British tabloid reported FIFA had concerns about the friendly wagers, because all players signed a charter of fair play, stating they would not bet on the tournament.

"But what is relevant -- if there are individuals saying 'I bet with you who scores the first goal,' this cannot be viewed as institutionalized betting," said Siegler.