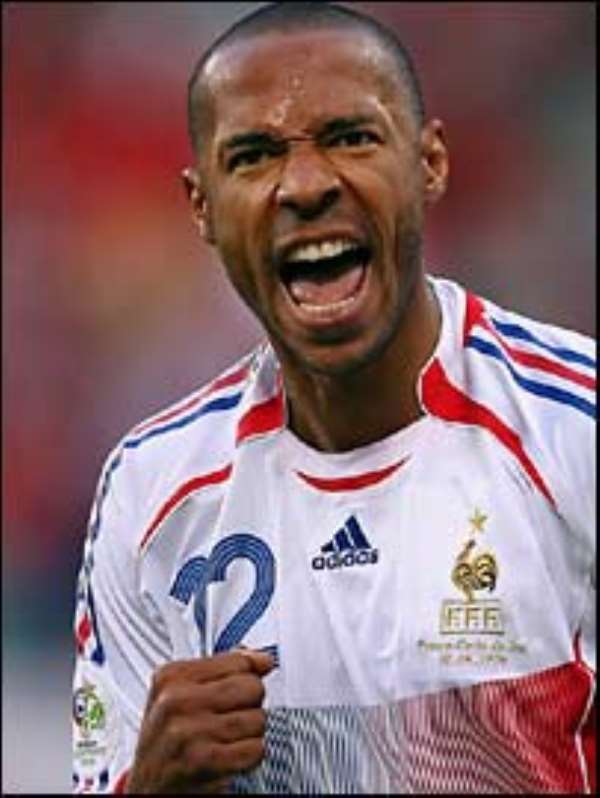 France remain without a win in the World Cup finals since their 1998 victory over Brazil after South Korea came from behind to snatch a point.
Thierry Henry gave France an early lead, latching on to Sylvain Wiltord's deflected shot to sidefoot home.

Patrick Vieira also looked to have scored, but the referee failed to give the goal, penalising Florent Malouda as he tried to force in the rebound.

But with 10 minutes to go Park Ji-sung punished some sloppy French defending.

The draw left South Korea top of Group G with four points, two ahead of France, who are in jeopardy of crashing out of the World Cup at the group stages for the second successive time.

France spurned two chances to score in a frenetic finale, Vieira ballooning the ball over the bar from a good position and Henry missing with just the goalkeeper to beat

The 1998 winners had looked soporific in their opening game against Switzerland but Raymond Domenech's side gave an altogether more alert performance until they slackened off in the closing stages.

Malouda's return had much to do with France's improvement as les bleus played at a much quicker tempo than they had managed against the Swiss.

Just as importantly Vieira gave a more convincing performance as well in the centre of midfield for France.

France laid siege to the South Korean goal in the opening 10 minutes and Lee Woon-jae did well to come out and narrow the angle to prevent Sylvain Wiltord from scoring.

The South Korean goalkeeper had no chance of stopping France's next attack - Henry took one touch before he found the net with deadly precision.

France should have had a second goal when Vieira's header clearly crossed the line, despite Lee Woon-jae's desperate efforts to keep the ball out.

When the ball came out of the goal Malouda lunged to reach it and in doing so he was penalised for fouling Ho Lee.

For 75 minutes of the game South Korea's attacks had tended to peter out the nearer they got to France's goal.

Just before the interval France goalkeeper Fabien Barthez had a momentary scare when Lee Chun-soo's free-kick went narrowly wide after it travelled through a packed penalty area.

Barthez was just as inactive for much of the second half but in the 81st minute when he was called on to be decisive he flapped in a desperately indecisive fashion.

Seol Ki-Hyeon's deep cross from the right was headed back by Cho Jin-Jae and Park scooped the ball over Barthez and William Gallas.

Zinedine Zidane was then booked for France and will now miss the third match, possibly bringing down the curtain on his career in a way he could never have envisaged.

Having reached the semi-finals in 2002, South Korea had been written off in the build-up to Germany 2006, but Dick Advocaat's side are on the verge of reaching the last 16, surprising all expectations.

My wife was pregnant – Husband of missing but found Takoradi...
50 minutes ago

I'm not bothered about a likely coup, I worry of possible up...
1 hour ago