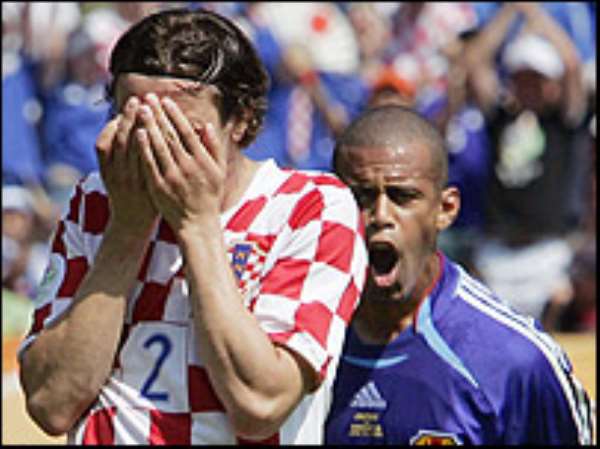 A penalty save from Japan's Yoshikatsu Kawaguchi denied Croatia victory, with a goalless draw not doing much to help either side's hopes of progression.
Goalkeeper Kawaguchi palmed away Darijo Srna's spot-kick after Dado Prso was fouled by defender Tsuneyasu Miyamoto in the first half.

Croatia will be happier with the point with Australia to come next, while Japan face the awesome task of having to beat Brazil to stand a chance of qualifying from Group F.

After 21 minutes of drudgery, the match sprung to life courtesy of a penalty awarded to Croatia.

Tsuneyasu Miyamoto clumsy challenge on Prso virtually ensured the Japan defender will not be named in the end-of-tournament XI.

Srna stepped up to take the spot-kick, but his near-perfect effort was spectacularly saved by Kawaguchi low down to his left.

Croatia did not seem too disheartened after wasting their golden opportunity, with Kranjcar and Klasnic causing serious problems for the Japanese defence.

Both came close twice, Kranjcar heading into the side-netting and seeing his 30-yarder rebound off the crossbar, while Klasnic scuffed a shot from three yards and had a stinging 20-yard effort saved by the alert Kawaguchi.

Japan were restricted to one clear chance, albeit from distance, with Stipe Pletikosa called on to parry Hidetoshi Nakata's piledriver.

Zico's Japan needed to step up a gear after the break and the introduction of Junichi Inamoto and the industry of Nakata seemed to give his side a lift.

Soon after the restart Yanagisawa missed arguably Japan's best chance, when he mis-hit Akira Kaji's pacy ball from the right.

Nakata stung Pletikosa's palms again from distance and late in the game Alex and then Masashi Oguro failed to connect when the ball flashed across Pletikosa's goal.

I denounce any disturbance in Odododiodio in my name – Mayor...
4 minutes ago