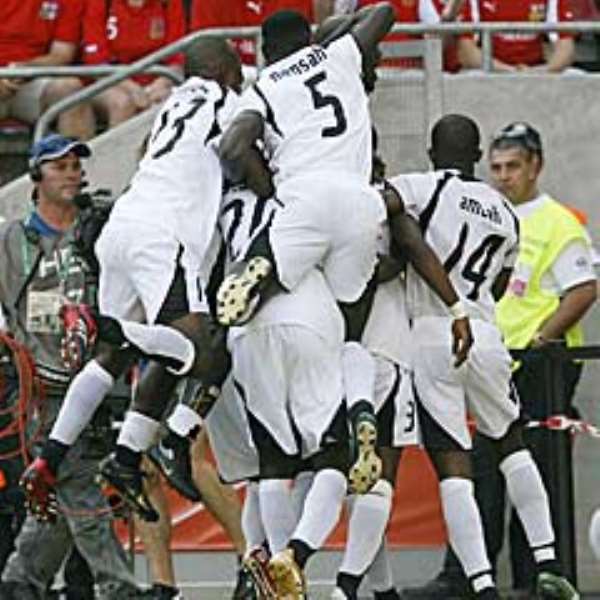 Ujfalusi was sent off for bringing down Matthew Amoah, but the Czechs had a reprieve as Gyan struck the resulting penalty against the post.

Petr Cech kept Ghana at bay with a string of great saves but the Black Stars sealed victory with a second when Sulley Muntari rounded off a fine move.

Ghana gave an instant demonstration of their determination to make amends for their error-strewn defeat to Italy by sweeping into the lead inside 70 seconds.

A Ghana corner was cleared only as far as Stephen Appiah whose cross was missed by Ujfalusi and fell for Gyan who finished superbly past Cech from the edge of the box.

The Czech Republic were having problems getting the influential Tomas Rosicky on the ball and when they did get crosses in they missed the giant figure of the injured Jan Koller and Ghana's defence were able to cope relatively comfortably.

Ghana's central midfielders Appiah and Michael Essien worked their socks off to negate the threat of Nedved and Rosicky.

The Czechs at last stitched a move together, with Jaroslav Plasil, Rosicky and Nedved combining to set up Poborsky for a cross which Rosicky fired wide.

Czech Republic's hunger for an equaliser almost proved their undoing as Asamoah Gyan caught them short-handed at the back and it needed a great save Cech to prevent Ghana doubling their lead.

At the other end Richard Kingston arched up to tip over a powerful drive from Plasil as the contest took on the air of a game in the knockout stages.

Drama erupted on 65 minutes when Ujfalusi brought down Amoah. Argentine referee Horacio Elizondo pointed to the penalty spot, but took an age to show the last Czech defender a red card.

Gyan was shown a yellow card for taking the penalty without the referee's permission, ruling him out of Ghana's last group game against the USA, and struck the retake against the post.

Ghana shrugged off that disappoinment to surge forward and Cech kept the Czechs alive with great saves from Muntari and Amoah.

But his resistance ended when Muntari ended off a fine move by firing past Cech from 12 yards.