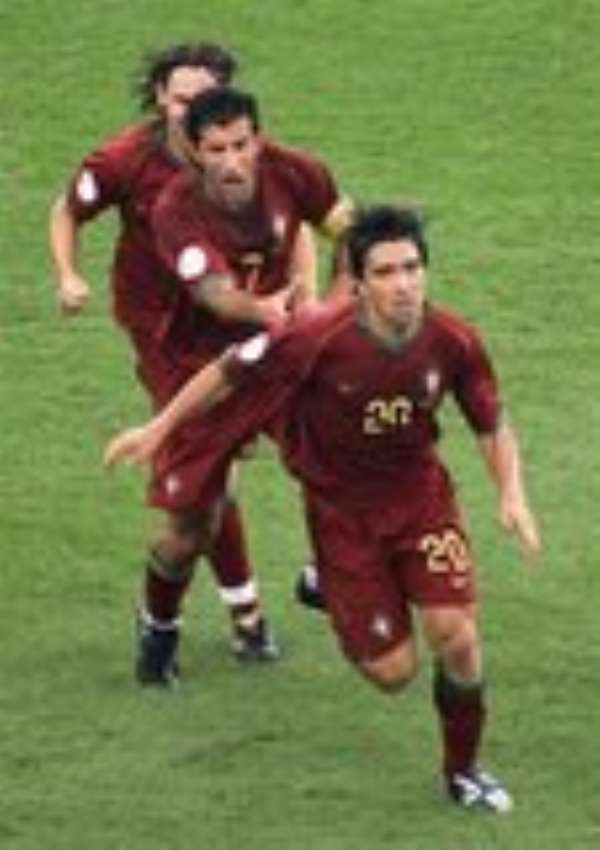 Portugal became the sixth team assured a place in the Round of 16 at Germany 2006 after second-half goals from Deco and Cristiano Ronaldo secured a 2-0 win against Iran on Saturday, 17 June 2006.
While Portugal were celebrating a second straight win in Group D - and coach Luiz Felipe Scolari's ninth in succession overall in FIFA World Cups™ - Iran were left to reflect on what went wrong after their second defeat confirmed their elimination. After a goalless first half in Frankfurt, Deco broke the deadlock with a long-distance strike in the 63rd minute and Ronaldo sealed the victory from the penalty spot with ten minutes remaining.

The match:
13': After making the early running, Portugal created the first significant chance when Deco controlled the ball brilliantly inside the area and fired a wicked half-volley on goal. Fortunately for the well-supported Iranians, Ebrahim Mirzapour managed to slap it away for a corner.

16': From a Luis Figo corner, Maniche's vicious volley was deflected over the crossbar as pressure began to mount on the Iran goal.

31': Andranik Teymourian broke in behind the Portuguese defence, only to see his shot strike the post. However, the assistant referee's flag was raised already for offside.

34': Another dangerous corner-kick from Figo picked out Cristiano Ronaldo some six yards from goal, but the Manchester United starlet could only watch as his well-directed header was chested off the line by Hossein Kaabi.

36': Kaabi was in the thick of things again. Just moments after Ronaldo had gone close with a fine strike from a tough angle, the raised boot of the Iran defender caught Figo in the face in an accidental collision.

44': Just on the stroke of half-time, Valencia full-back Miguel roared in and fired a shot from close range. But his effort off the keeper and wide of the post.
Portugal too powerful:
63': After a frenetic, end-to-end start to the second period, Barcelona's midfield jewel Deco put the favourites out in front. After collecting a fine slipped pass from Figo, he broke the impressive Iranian resistance with a screaming arrow to the top corner from 23 yards out. (1-0)

69': Fighting against early elimination from the finals, Iran's second-half substitute Rasoul Khatibi nearly put his team back onto level terms. But his good attempt, after collecting a long ball from the back, slipped just wide of Ricardo's goal.

78': Mehdi Mahdavikia had a great chance to equalise but his header from close range was well saved by Ricardo.

80': The game switched immediately to the other end where Iran captain Yahya Golmohammadi took down Figo with a sliding challenge and referee Eric Poulat of France did not hesitate in pointing to the spot. Ronaldo, cool as you like, fired home to ensure three more points for Portugal. (2-0)
90': Pauleta had a clear chance to increase the lead, only to fluff his lines on a counterattack.

In conclusion:
Despite battling bravely all the way and showing much to be proud of, Iran's hopes are crushed with one group game still to go. Portugal, while sure of a spot in the Round of 16, are not yet guaranteed first place in the group with a tough final test against second-placed Mexico still to come. Only pride will be at stake for Iran in their final match against Angola.

Parliament urged to investigate roles played by SEC/EOCO in ...
1 hour ago