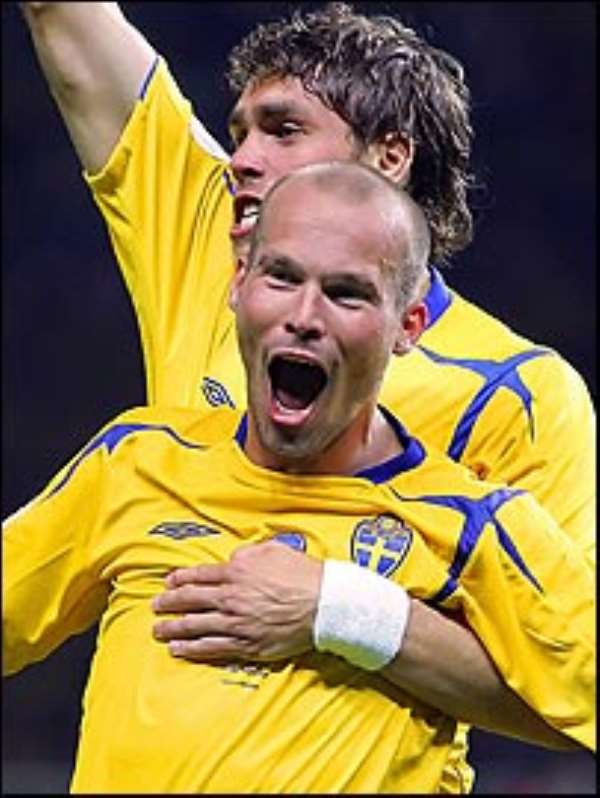 Freddie Ljungberg's 88th-minute winner for Sweden knocked Paraguay out of the World Cup.
England, already certain of a place in the second round, would have won the group had this game been a draw.

But Ljungberg popped up at the far post to head home after Marcus Allback had nodded a cross back across goal.

Earlier, Zlatan Ibrahimovic shot tamely at the keeper and Allback had an effort cleared off the line as it looked like Sweden would not break Paraguay down.

Sweden now know that victory over England on Tuesday will see them, and not Sven-Goran Eriksson's men, win Group B. But defeat could send the Swedes home and put Trinidad and Tobago into the second round.

Paraguay proved as stubborn to break down in this game as they had been when England played them last Saturday.

The Scandinavians started in determined fashion, but were frequently met by some rugged Paraguayan defending - an approach which led to Denis Caniza receiving the game's first yellow card inside three minutes, for tripping Henrik Larsson.

In the ninth minute Ibrahimovic touched a header back to Kim Kallstrom, whose excellent shot from outside the box was equalled only by the save from Aldo Bobadilla.

Three minutes later, it was Larsson's turn to cushion a header back for an onrushing midfielder - Christian Wilhelmsson driving a fierce shot was just wide of Bobadilla's upright.

It was an impressive start from the Swedes, but Paraguay weathered the storm and then began to come into the opposing half a little, as Roque Santa Cruz, Nelson Valdez and Jorge Nunez served notice that Sweden's defenders would need to be watchful all evening.

Larsson and Ibrahimovic, after their threatening first quarter of an hour, began to be seen less and less, as the toothlessness which has seen Sweden fail to win a game since last October began to re-appear.

Bobadilla rarely had a save to make, and on the one occasion Ibrahimovic did get through his shot was weak and straight at the goalkeeper.

In contrast to the first half, it was Paraguay who made the better start in the second period, Valdez getting down the left and checking back before shooting into the side-netting.

And when the ball did get down to the other end, Bobadilla proved a worthy deputy in goal for the injured Justo Villar, beating out a 54th-minute free-kick from Larsson.

Four minutes later Bobadilla needed the intervention of defender Caniza, who hacked off the line after substitute Allback had been put through and lobbed the goalkeeper.

Still the out-of-sorts Swedes desperately tried to find that elusive goal, Larsson heading over after good work on the right from the lively Allback.

Then with 10 minutes left, Allback seemed certain to score as he turned and shot from close-range, but the effort was tame enough for Bobadilla to hold.

Finally Ljungberg made the breakthrough - and ensured his team are favourites to follow England into round two.

TRIVIA
Sweden's victory was their first in 2006, after drawing five times and losing once this year. The Swedes now only need one point from their last match against England to be sure of progressing to the last 16.

Paraguay are out of contention after this defeat. They had qualified for the second round in their last three appearances at the World Cup. The last time they failed to successfully negotiate the group phase was in 1958.