I Almost Joined Hearts Before Signing For Kotoko - Augustine Sefah 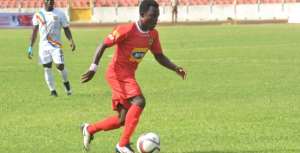 Former Medeama SC defender Augustine Sefah has revealed that he almost joined Hearts of Oak in 2017 before he decided to sign for Kumasi Asante Kotoko instead.

The 29-year-old right-back completed a switch to the Kumasi outfit to become a Porcupine Warrior three years ago on the back of an impressive stint with Obuasi Ashanti Gold.

Speaking in a recent interview, Augustine Sefah has explained how his move to Hearts of Oak broke down before the deal with Kotoko happened.

“I went to train with Hearts for three months but because of some issues I couldn’t join them. I nearly signed with them but as I said, the issues I faced there prevented that move and I left to sign for Kotoko”, the full-back said as quoted by Myfabulousonline.com.

At Kotoko, Augustine Sefah has enjoyed a good spell in the last couple of years but is now enduring a difficult spell as he struggles for playing time.

Before the 2019/2020 Ghana Premier League season was suspended as a safety measure against the spread of the Coronavirus disease, he only managed to make 2 appearances.