Bundesliga: Schalke Beaten Again As Augsburg Hit Them For Three 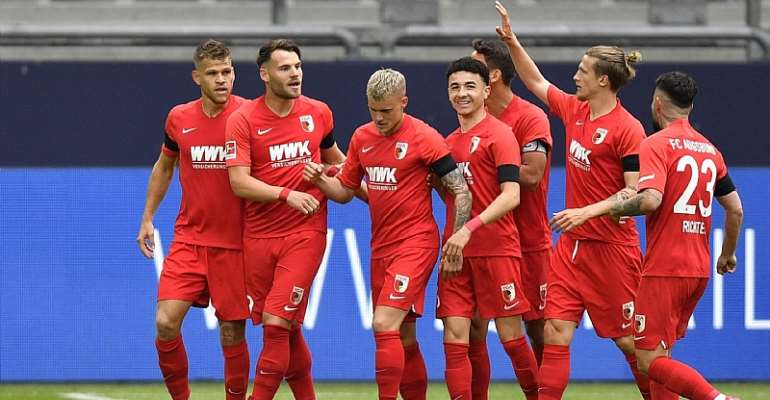 Eduard Loewen of Augsburg celebrates with teammates after scoring their sides first goal during the Bundesliga match between FC Schalke 04 and FC Augsburg at Veltins-Arena on May 24, 2020 in Gelsenkirchen, Germany. Image credit: Getty Images

Schalke’s dreadful run of form continued as David Wagner’s side fell to an embarrassing 3-0 defeat to relegation-threatened Augsburg at the Veltins Arena.

The hosts came into this match determined to make amends for their humiliating 4-0 defeat to Borussia Dortmund in the Revierderby the weekend before, but this pitiful performance and result only compounded the problems being experienced by the Royal Blues.

Augsburg struck the opener, and what would ultimately prove to be the match-winner, after just seven minutes, with Eduard Lowen curling home a powerful freekick from 25 yards out past Markus Schubert in the Schalke goal.

Former Manchester City youngster Rabbi Matondo was the home side’s only effective attacking outlet and created Schalke’s only genuine opportunity of the first half, but had his low shot saved after bursting into the box.

Not much improved in the second half and Schalke’s fate was effectively sealed when Noah-Joel Sarenren-Bazee made the most of some careless defending to lash home a second after 76 minutes. The embarrassment was capped in stoppage time when Sergio Cordova added a third for Augsburg.