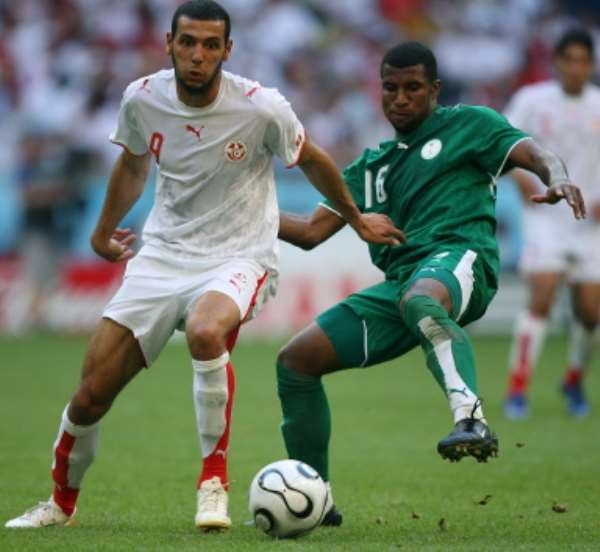 An injury-time header from Radhi Jaidi rescued a point for Tunisia as they drew 2-2 with Group H rivals Saudi Arabia in Munich on Wednesday, 14 June 2006.
Jaidi struck two minutes into added time just as Saudi Arabia were contemplating a fine comeback victory. Trailing to Zied Jaziri's 23rd-minute goal, the Saudis drew level through Yasser Al Kahtani's fine near-post finish in the 57th minute and then thought they had taken all three points with substitute Sami Al Jaber completed a sweeping move with a cool finish six minutes from time.

The match
3': The final game of the first round of matches, Tunisia launched their third consecutive FIFA World Cup™ campaign on the offensive with Jaziri tearing into the box before falling under the challenge of Redha Tukar.

23': After a nervous start, Saudi Arabia appeared to settle, winning a number of corners, but they were caught out following a set-piece at the other end. Tukar headed an innocuous free-kick against the head of a team-mate and Jaziri latched onto the bouncing ball, leaping off the ground to strike an unstoppable volley high into the net. (1-0)

34': Saudi Arabia, who lost 8-0 to Germany in their opening match at Korea/Japan 2002, offered their first hint of a reply when Yasser Al Kahtani almost took advantage of confusion at the back between Jaidi and Hatem Trabelsi. However, he could not quite get enough power on his header from eight yards.

37': Tukar, already heavily involved in the match, clipped a centrally positioned free-kick from 25 yards safely into the hands of Ali Boumnijel.

45': Nawaf Al Temyat tried his luck from even further out after good work from Mohammed Noor but the effort flew well wide of target as the Tunisian defence continued to look comfortable before the break.

Tables turned
47': Karim Haggui's concentration was found wanting at the start of the second half but although the predatory Noor latched onto the defender's mistake, he misjudged his flicked finish and the ball trickled well wide of goal.

57': As the Sons of the Desert continued to press, midfielder Noor turned provider, finding space down the right and drilling a fine centre for Al Kahtani to side-foot home at the near post for a well-worked equaliser. (1-1)

67': Saudi Arabia were now well on top and stroking the ball confidently around. After more fine approach play, skipper Hussein Sulimani tested Boumnijel with a snapshot from outside the box but the Club Africain goalkeeper was equal to it.

84': The Saudis broke swiftly from defence with a series of first-time passes. Malek Al Hawsawi fed Al Jaber and, with virtually his first touch, Saudi Arabia's most famous player drew Boumnijel before slotting the ball home with his left foot.

88': Tunisia threw everything into attack. Kaies Ghodhbane fired inches over from distance but with Saudi fans beginning to celebrate there remained one final twist in this remarkable game.

90+2': Jaidi, now playing as a centre-forward, nodded the ball onto Jaziri, who crossed perfectly for the giant Bolton Wanderers defender to thunder a close-range header under the forlorn body of Mabrouk Zaid to make it 2-2.

In conclusion: A point a piece for Tunisia and Saudi Arabia after an exciting encounter which both sides will argue they should have won. Spain's 4-0 victory over Ukraine earlier means both teams will fancy their chances of making the second round.