Pele’s Shoes Were Too Big To Fit In - Odartey Lamptey 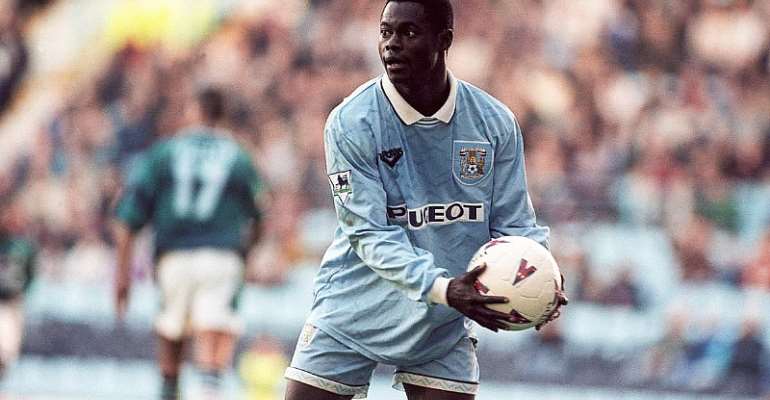 Former Black Stars great, Nii Odartey Lamptey, has opened up on his career, admitting that comparisons with Brazilian icon Pele at the early stages of his career was very difficult to bear because of the weight of expectation of the football world.

Lamptey burst onto the scene as a precocious talent when Ghana’s Black Starlets made a maiden appearance at the 1989 FIFA Under-16 World Cup in Scotland.

In the presence of football connoisseurs, young Lamptey glowed with his breathtaking skills and powerful runs in the Ghana side that made a first-round exit and caught the eyes of the Brazilian who described the youngster as his next natural successor. It turned out to be a prediction from the world’s most celebrated footballer which later became a poisoned chalice for the young talent in his quest to succeed and to live Pele’s dreams.

“In our first match in the Scotland tournament, we played against the host nation in the presence of Brazilian Pele who picked me as the best player and then declared afterwards that I was a bright star likely to step into his big shoes,” Lamptey recalls three decades on in an interview with the Daily Graphic.

“Pele gave me the hype in 1989 when I was only 16 and in the teams, I joined perhaps they were expecting so much from me just as Pele did. I never saw him play, but later I watched his videos and realised that he had so much quality so there was no way I could have fit into his big shoes. Perhaps in 1989, he saw something very unique about me so it was a privilege for him to say such good things about me.”

Lamptey acknowledged that the Brazilian’s name was too huge for a youngster to carry during his career and it was only after hanging up his boots that he realised why he could not fit into Pele’s shoes.

After the Scotland tournament, Belgian side Anderlecht signed the teenage sensation who made an explosive start to his professional career and drew comparisons with some big stars in Europe. He also became the key man in Ghana’s age-group teams, including leading the Starlets to win the 1991 FIFA Under-17 World Cup in Italy. But the spotlight also placed a huge burden on the youngster as he developed his talent.

“I was already a professional player at the 1991 FIFA Under-17 tournament which we won and I was selected as the Overall Best Player and the joint winner of the Golden Boot award with five goals. So at a tender age, there was so much expected of me.”

While some connoisseurs of the game say Lamptey did live up to his hype, the Ghanaian reflecting on his career admitted that fitting well into Pele’s shoes would have been a great achievement, he had no regrets at the heights he attained because his career had many high points.