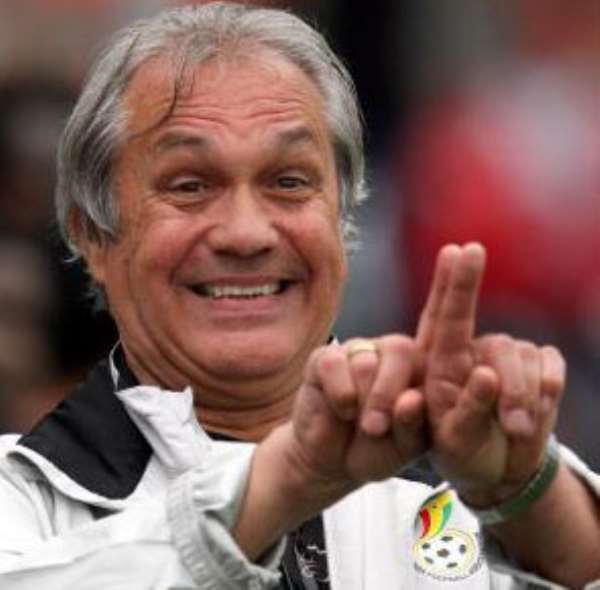 Wurzburg, - Ratomir Dujkovic, Black Stars trainer is hoping to seal all the loop holes that contributed to the loss of the Black Stars to Italy in their World Cup Group E opener before their second match on Saturday.

The Stars will be in a must win situation against Group leaders, Czech Republic in Koln on Saturday.

Coach Djukovic told the GNA Sports in Hanover that his focus would be trimming the rough edges in defence and attack when the team resumes training on Wednesday.

Djukovic said he had identified a huge problem with the left side of the team's defence where he replaced Emmanuel Addoquaye Pappoe with a central defender, Shiela Illiasu in the match against Italy. 'There was problem with our left side of defence today and I hope to solve it before our next game'.

The Czechs drowned the United States of America (USA) 3-0 in their opener earlier Monday and start as favourite in the duel with Ghana. The coach insisted he would find the right antidote to the leaking defence before Saturday's game.

The Serbian seemed pleased with the output of his midfield where Michael Essien excelled with skipper Stephen Appiah, Sulley Muntari and Eric Addo selling out average performances.
He has a hell of work to do in attack where Asamoah Gyan and Mathew Amoah failed to click in the match against Italy.

The coach told the GNA Sports, 'our attack is also not sharp and I hope to work on them to ensure we get a good result.' The former Rwanda trainer though appeared positive about the team's chances in the group.

'From what I saw of the boys against Italy, am still convinced we can make it to the semis.

'Am very proud of my team and I congratulate the boys for their display.'

He said he expected the midfielders who had often scored the goals to help the team out with the goal drought. 'Every player in the team has a mandate to score goals and I expect all the players to help the strikers out during matches.'