Emanuel Navarrete To Fight On June 6 In Mexico City 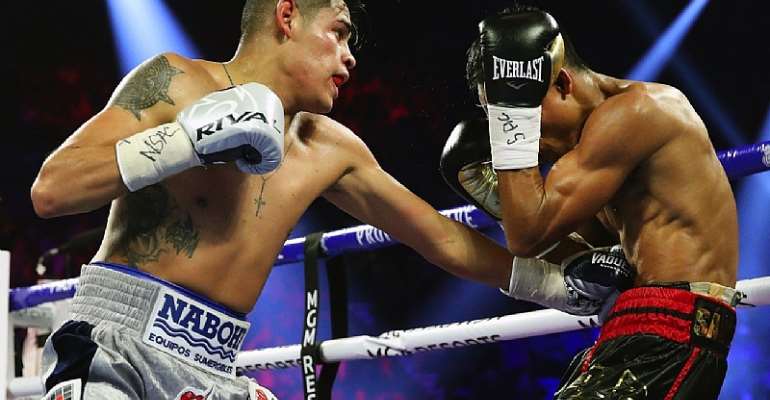 Emanuel Navarrete (31-1, 27 KOs) will be fighting at featherweight next month against a still to be determined opponent on June 6 in Mexico City, Mexico. This will be a behind-the-closed doors events with it taking place at the TV Azteca in Mexico City.

This won’t be a defense for WBO super bantamweight champion Navarrete, and that lets the pressure off for him to face anyone. Hopefully, it’s not someone too over-matched because that would make for lousy television.

They’re not taking any chances that the fighters could come down with an illness due to the pandemic. A ring will be built inside the studio, and the fans won’t be attending.

This will be a showcase fight for the knockout artist Navarrete, who has the power and the youth to become a big star. What he doesn’t have thus far is the right opposition to take his career to the next level.

If Navarrete were to stay at 122, his career would stall out due to the politics of boxing that prevent interesting fights from taking place.

This will be the first fight in Mexico since the pandemic started, so it’s going to be engaging in that respect. However, the 25-year-old Navarrete, who will be headlining the card, isn’t likely to be facing a talented contender.

There’s a little over two weeks to go before the June 6th card, which is a tremendous hint that Navarrete won’t be facing a real threat.

Testing will reportedly be done on all the people involved, be it the fighters, cornermen, trainers, and ringside doctors.

Navarrete has looked sensational since winning the WBO 122-pound title in 2018 in beating champion Isaac Dogboe by a close 12 round decision. In their rematch, Navarrete stopped Dogboe in the 12th round last year in May 2019.

The heavy-handed Navarrete wore Dogboe down and put him on the canvas twice in the sixth and twelfth round. After that fight, Navarrete has had it easy, crushing Francisco De Vaca, Juan Miguel Elorde, Francisco Horta, and Jeo Santisima.

The main criticism that Navarrete has been getting from boxing fans is the low level of opposition that he’s been fighting. Yes, it’s good that Navarrete has defended his WBO 122-pound title five times, but against fighters that weren’t much of a threat to him.

In moving up to featherweight, Navarrete will be able to go after the WBO belt, which is currently held by Shakur Stevenson. There are also potential fights for Navarrete against Gary Russell Jr., Josh Warrington, Leo Santa Cruz, Carl Frampton, Michael Conlan, and Kid Galahad.

Fans want to see Navarrete take on the other 122-pound champions like Rey Vargas, Murodjon Akhmadaliev, and Brandon Figueroa. That doesn’t look as if it’s going to happen.

What we’re going to see is Navarrete moving up to 126 to go after the top guys in that weight class. This is a move that is two years overdue, though, as Navarrete could have already been involved in several fights at featherweight if he’d made the move up to 126 in 2018 instead of waiting.