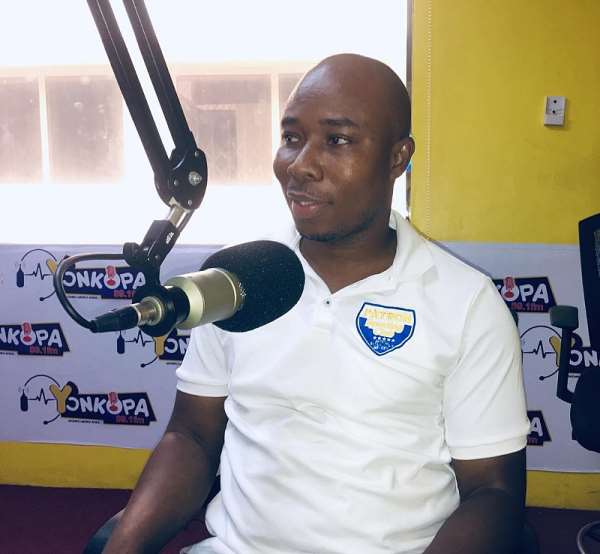 Mr. Richard Ameniko, Chief Executive Officer of a third-tier Patron Sporting Club based in Nmai Dzorn, Accra, has explicitly stated that club administrators and to a large extent owners and other major stakeholders of football administration in Ghana have been and are lazy!

He said this and other pressing issues in an exclusive interview with Yonkopa FM’s Sports Centre on Thursday morning. Though the bashful yet enterprising young CEO could say this astounded in the lines of words consequently vented when a direct question was put to him; “Is football business financially profitable in Ghana?”

“(Ironically chuckles) There’s no money in Ghana football!” This answer bowls over Odiagoro Kofi Asante, host of the show and many who listened alike; perhaps even you!

Mr. Ameniko sums up his seven pointers that if time would have allowed in this “everything that happens in football rests with administrators. If other countries get paid greatly investing in football and Ghana isn’t typified how we have approached the global money bag: laziness and lack of innovation. Indeed we could have been any of the football-rich countries by virtue of the many years of the line. We should be innovative enough to reach our full potential no matter whatever situation.”

He spoke extensively about Patron Sporting Club, a division two side in the Greater Accra Region. Touted to carry the 2019/20 season by storm is, however, hit by the adverse effect of the COVID-19 pandemic. Yet to taste any league of the Football Association, boasts of a third-place accolade of a 64-club division two Jordan Anaglah Memorial Cup-2019. PSC had six nominations, the highest of any club at the awards of the same tournament.

He assesses the work of the new leadership of football governance and admonishes all stakeholders to rally behind them to achieve. 70% is the score he awards for the six months of being in office.