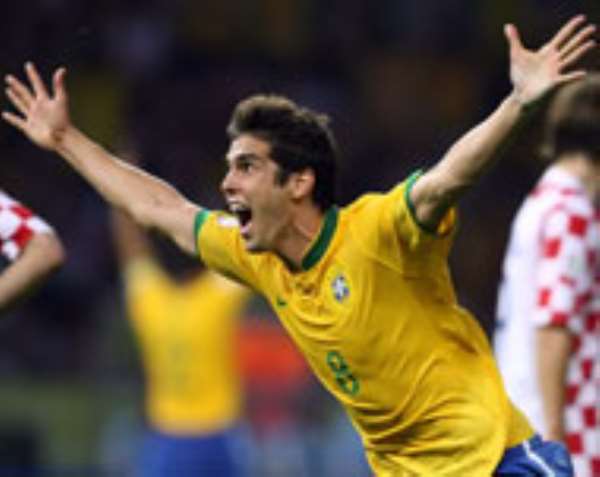 Brazilian midfielder Kaka scored his side's only goal as the World Champions started the tournament with a 1-0 victory over Croatia in Berlin on Tuesday.

In a hard fought contest where Croatia gave their chequered fans plenty of reason for optimism, the AC Milan maestro's moment of magic was enough the split the teams.

With just one minute remaining in the first half, Kaka was afforded too much time and space at the top of the box as he caressed the ball around Croatian keeper Stipe Pletikosa.

In the first half the five time champions had been restricted to long range efforts by the miserly Croatian defence.

Prior to Kaka's opener Pletikosa only had two real saves to make.

In the 14th minute a trademark Roberto Carlos left foot thunderbolt from 40 yards stung the keeper's hand, while his defensive partner Cafu also went close with a long drive.

The Europeans had their own chances to open the scoring with towering central defender Igor Tudor causing a few more nervous moments for the fans in yellow.

The Siena player rose to meet a free header on 38 minutes, but despite his considerable height he missed by a matter of inches.

The game came to life in the second half as Zlatko Krancjar's men surged forward looking for an equaliser.

Former mechanic Dado Prso started the half with a stunning turn and strike and continued with his industry throughout the match.

As can be expected, the Brazilians followed the adage that attack was the best form of defence.

Real Madrid striker Ronaldo showed some of his power with a long drive on 56 minutes as he looked to add to his tally of 12 World Cup goals.

However it was the first real sighting of the portly front man and minutes later Carlos Alberto Parreria chose to replace him with club mate Robinho.

Unlike other teams in Germany who have looked to defend a 1-0 lead, the South Americans continued to press for their second.

Ronaldinho forced a great save with a header, while Adriano missed at point blank range.

Their opponents kept coming though and Celtic target Niko Krancjar could well have leveled things late had his dipping volley had more accuracy.

Croatia will face Japan next in a must win game on Sunday, while Brazil face the other first up winner in Group F Australia hours later.