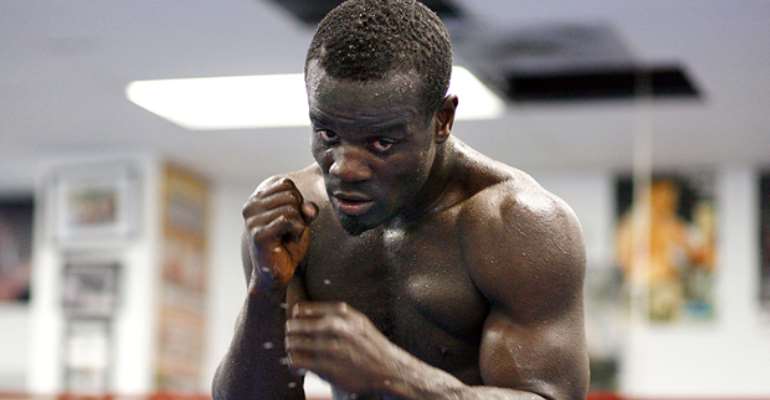 The onetime IBF welterweight champion, Joshua Clottey has expressed his regret in his fight against Manny Pacquiao on March 13, 2010.

Speaking in an exclusive interview with Addae Munumkum Ansah Fredrick on the Sports Center on Ocean 1TV and Ahomka FM, Joshua Clottey indicated that the said fight was his worse fight ever, considering the erroneous agreement he had with his management and the possible spiritual initiation his opponent has engaged.

The former IBF welterweight champion further disclosed on the 21st of May, 2020 that, entering into such about with the feeling of being cheated and not being treated fairly had a negative impact on him.

According to Clottey, even before his bout with Pacquiao, his manager alone had half of the money he made out of his initial fight with Miguel Cotto in New York City at Madison Square Garden.

This he described as unfair and a worrying situation which really didn’t change although he had discussed his concerns with his management.

Joshua elaborated that with the thoughts that about fifty percent (50%) of his pay going to his management team out of which about thirty-three percent (33%) would be going to the manager alone who showed no interest in his training, well-fare among others had a toll on his bout.

With a belief that Manny Pacquiao may have initiated himself in some form of spiritual edification before their bout at the Dallas Cowboys stadium in Arlington Texas, Joshua Clottey revealed that he was unable to prepare properly and pray effectively for the bout, a situation he couldn’t comprehend. When asked if he had regretted fighting Manny Pacquiao, the former WBO welterweight champion –Joshua Clottey said, he has “big, big, big regret….”

He however indicated that he is still accessing himself and training as well to ensure that, he is fit whenever the opportunity presents itself.

The 43-year-old boxer said he is certain he would return to the ring after Covid-19. He advised young boxers to remain focused and take alcohol out of their profession and train always.