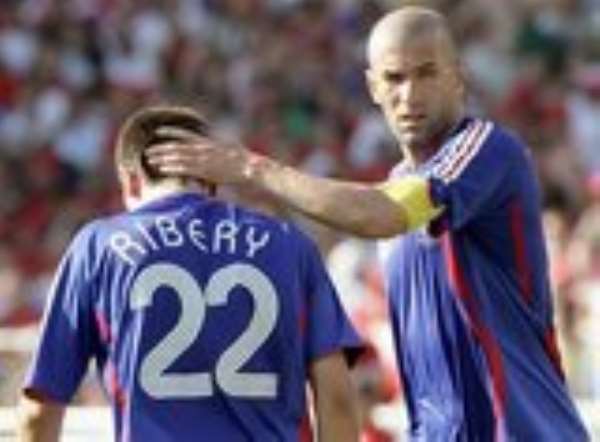 There was once again no separating France and Switzerland as they played out a goalless draw in their opening 2006 FIFA World Cup™ match in Stuttgart on Tuesday, 13 June 2006.

The Group G rivals drew both their meetings in the European qualifying round and recent history repeated itself here in a match of few clear-cut scoring opportunities. The closest either side came was when Swiss midfielder Tranquillo Barnetta's free-kick bounced back off a post and Alexander Frei failed to convert the rebound.

The Stuttgart stalemate leaves the European neighbours two points beneath the early group leaders Korea Republic, 2-1 winners over Togo earlier in the day. It also leaves France without a FIFA World Cup goal in the four finals matches they have contested since winning the Trophy in 1998.

The match:
5': France made the brighter start and Sylvain Wiltord of Lyon – preferred to Juventus forward David Trezeguet – crossed dangerously from the right for his former Arsenal team-mate Thierry Henry. However, Henry failed to rise high enough to make a firm connection with his header.

13': Another fine bit of service from the right nearly saw the French prise open the Swiss backdoor, but Patrick Vieira's full volley at the back post lacked the proper direction and bounced harmlessly over the bar.

21': Henry tried his best to turn provider in the next French move of note. Weaving his way into the penalty area, his tantalising low cross was not read by the advancing Wiltord and slipped tamely across Pascal Zuberbuehler's goalmouth.

24': The Swiss nearly scored with their first chance of any consequence as Barnetta's long-range free-kick evaded every head in a packed area and struck Fabien Barthez's far post. Although Frei was on hand for the rebound, he could not make a clean contact with the ball from six yards out.

30': A brilliant bit of approach work from Henry set up Marseille man Franck Ribery, but French debutant could only fire over Zuberbuehler's crossbar from just outside the box.

38': France saw their best chance of the first half go begging as Ribery beat his man down the right and laid the ball across to Henry. However, his shot on goal took a deflection en route to Zuberbuehler, amid French protests for handball.

Goals hard to come by
60': After a slow, cautious start to the second period, the Swiss had the first real chance since the break as the ever-lively Barnetta burst into the box from the left, only to have his progress halted by the hulking figure of Lyon's Eric Abidal.

65': Shortly after, Switzerland nearly opened their account with their best chance of the game. Ludovic Magnin crossed to second-half substitute Daniel Gygax who saw his powerful, close-range header scrambled away by a sprawling Barthez.

69': In an attempt to inject some spark into the French attack on a warm evening, France boss Raymond Domenech withdrew Ribery in favour of in-form Manchester United striker Louis Saha.

73': Zinedine Zidane's looping free-kick picked out Henry at the back post but although William Gallas was just a whisker away from meeting the striker's flick-on, the linesman's flag had already indicated an offside decision.

89': With the clock ticking down, France substitute, Vikash Dhorasoo, nearly struck a late winner with a vicious shot from a tight angle. Unfortunately for Les Bleus his effort slipped agonisingly wide of the back post.

In conclusion:
With a point apiece, both sides will be reasonably pleased even if Korea Republic, for the time being at least, sit top of the group. It is the Koreans who are up next for France on 18 June while Switzerland - who have kept their first clean sheet in 23 FIFA World Cup matches - will tangle with Togo the day after.