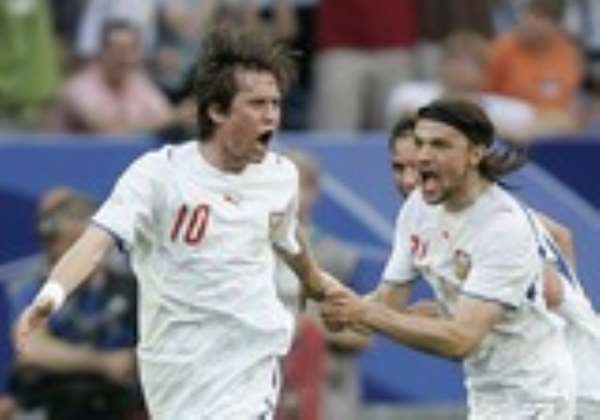 The Czech Republic started their Germany 2006 campaign in style with a 3-0 win over the USA in Gelsenkirchen on Monday, 12 June 2006.
Jan Koller gave the Czechs a dream start in the opening match in Group E by heading them in front after five minutes and Tomas Rosicky doubled their advantage with a superb swerving strike in nine minutes before the break.

Despite the setback of losing Koller to a hamstring injury, Karel Bruckner's men retained their grip on the game and Rosicky sealed the three points with his second goal on 76 minutes.

The match:
5': The Czechs got off to the best possible start when a right-wing cross from Zdenek Grygera found Koller, who slammed a powerful header past goalkeeper Kasey Keller to give his team an early lead. 0-1

11': After a shaky start, the US produced their first period of pressure, beginning with a header from Eddie Pope which went wide.

28': Some fine possession finally produced a dangerous opportunity for the US when Bobby Convey squared a ball for Claudio Reyna. He shot from just outside the penalty area and his low drive hit the left post.

36':With the Americans threatening an equaliser, the Czechs found another moment of brilliance, as a headed clearance fell to Rosicky, whose wonder strike from 25 metres flew past Kasey Keller in the US goal. Two shots, two goals for the Czechs. 0-2

42':Just minutes later and a serious blow for the Czechs as Koller went down in obvious pain with an apparent hamstring injury and had to be replaced.

Rosicky seals it
46':The US started the second half with a double switch, Pablo Mastroeni and Steve Cherundolo coming off in favour of John O'Brien and Eddie Johnson.

51':Despite the changes, the Czechs were the ones who fired the opening salvo of the half, with Tomas Ujfalusi's glancing header missing at the far post.

62':Eleven minutes later, the Czech Republic gave another notice that more goals might be in the offing when Karel Poborsky's powerful volley from a left-wing cross flew wide of the near post.

68': Rosicky almost had his second with another shot from 25 metres, this one hitting the crossbar.

70':Minutes later at the other end, Johnson tried to answer with an attempt from a similar distance, but his bending shot went wide of the left post.

76': Shortly after Johnson had narrowly failed to connect in front of Petr Cech's goal, Rosicky sealed the Americans' fate when he broke free down the centre and beat Keller again. 0-3

81': Johnson continued to look dangerous for the US, firing in one shot that went just over the bar, but overall the Americans failed to force the Czech goalkeeper into a single difficult save.

In conclusion
The US team displayed several nice combinations in midfield throughout the match, but they struggled to translate them into clear scoring opportunities. Czech Republic, meanwhile, did not create a host of chances but they had the quality to capatilise on the ones they did make for themselves. Things will not get easier for the States, as they will face Italy next in another difficult Group E clash, while the Czechs will play Ghana.

Minority will reject move by gov’t to purchase new president...
39 minutes ago