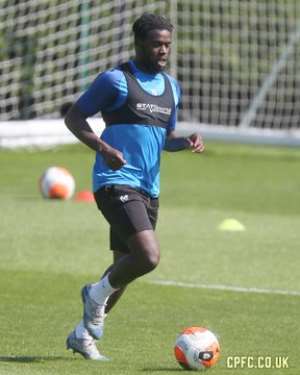 Ghanaian international Jeffery Schlupp has started training with his teammates at Crystal Palace as they build on their fitness level ahead of the resumption of the English Premier League season.

The defender who can also play as an attacker sustained an injury prior to the suspension of the season as a result of the Coronavirus (Covid-19) disease.

In the last 2 months where the campaign had been on hold, he has fully recovered and looks set to return to action when the Premier League finally makes a return.

On Tuesday when the Crystal Palace team trained for the first time in at least the last 8 weeks, Jeffery Schlupp was part of the 25 players that were present.

The players of the Eagles were divided into 3 teams as they engaged in light training while observing strict safety measures.

Training is expected to continue in the coming weeks in smaller groups but full-scale training where there will be contact is yet to be decided.

Football authorities in England are currently in link with the government as they look forward to settling on a return date for the top-flight league in June.

Ghana’s Jeffery Schlupp established himself as one of the key figures at Crystal Palace before his injury woes. He has made 14 appearances in this campaign and has 2 goals and 2 assists to his name.