Daniel Amartey To Part Ways With Leicester City This Summer 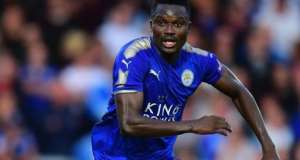 Yusif Chibsah, manager of Daniel Amartey has given an indication that the midfielder will part ways with English Premier League side Leicester City this summer.

The versatile player became a member of the Foxes in 2016 when he moved from Danish giants FC Copenhagen on the back of an impressive 2-year stay.

Due to a nasty injury, he picked up in 2018, Daniel Amartey failed to make an appearance in this season’s English Premier League before it was suspended even though he made full recovery in 2019.

He never managed to impress new boss Brendan Rogers and hence could not feature for the senior team upon his return to full fitness.

Speaking to Starr FM, Yusif Chibsah who is the manager of the midfielder has revealed that they are looking at other options to ensure he gets to play regularly next season.

“Amartey has recovered and we are looking to find new opportunities for him. He’s been out of favour under the new gaffer so we will see how best we can solve that issue”, he said.

Chibsah continued, “He is still with the Foxes but he is not been getting more playing time due to the fact that he got injured but after his injury, they consider him as surplus so there should be a way out”.