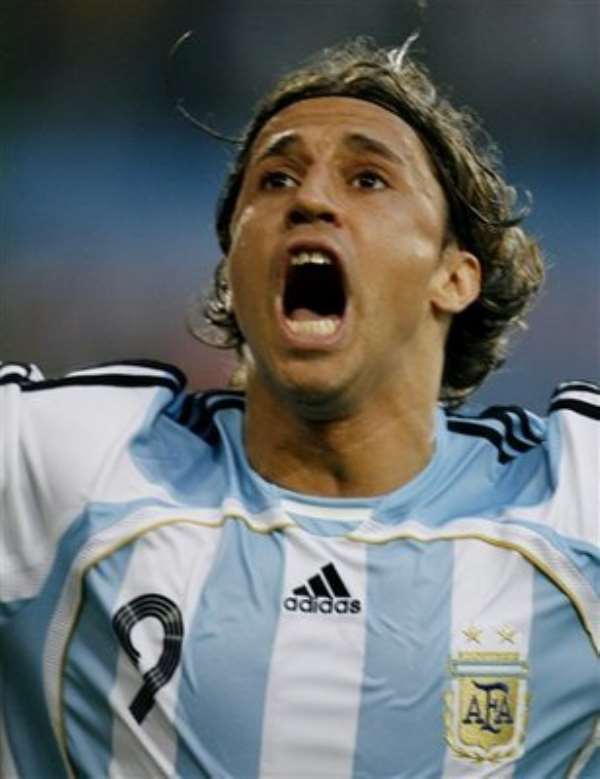 In a highly entertaining Group C game in Hamburg, two first half goals from Hernan Crespo and Javier Saviola helped Argentina to a 2-1 win over Côte d'Ivoire in Hamburg on Saturday, 10 June 2006.
The Albiceleste took the lead in the 24th minute when Crespo scored a classic poacher's goal. Henri Michel's side failed to deal with a Juan Riquelme free-kick and the Chelsea striker was on hand to turn the loose ball home.

Argentina doubled their advantage fourteen minutes later when Riquelme picked out Saviola with a great pass and the striker produced a beautiful finish to steer the ball past Jean-Jacques Tizie.

Didier Drogba, Crespo's team-mate at Chelsea, gave the Ivorians hope with a goal eight minutes from time, but the South Americans hung on to secure the three points.

The match:
3': Côte d'Ivoire forward Didier Drogba had his first sight of goal but his header missed the target by some distance and flew over the top of the crossbar.

14': Argentina's Juan Riquelme released Maxi Rodriguez, who whipped in a dangerous cross and Côte d'Ivoire defender Kolo Toure just beat Hernan Crespo to it to concede a corner before the Chelsea striker was able to pounce.

15': From the resulting corner, Roberto Ayala powered a header towards goal and the Elephants' keeper Jean-Jacques Tizie was relieved to gather it at the second attempt.

24': The Albiceleste moved in front as the game took on a frenetic pace. Riquelme provided the cross from a free-kick and when the Ivorians failed to deal with it and clear their lines, Crespo was on hand to stab the loose ball home past Tizie (1-0).

30': As the TV cameras picked out Argentine legend Diego Maradona looking happy in the crowd in Hamburg, Bonaventure Kalou tried to wipe the smile off his face by bursting into the area and shooting, but his effort flashed past the post.

35': Drogba's cushioned header provided the Elephants' midfielder Kader Keita with a fantastic opportunity to equalise, but as he stooped to try to guide the ball home with his head, Argentina goalkeeper Roberto Abbondanzieri blocked the attempt with his legs.

38': Argentina extended their lead and, once again, the outstanding Riquelme was the provider. He cleverly steered the ball through to Javier Saviola, who beat the offside trap to quickly poke the ball past Tizie (2-0).

Argentina search for third:
48': Argentina wasted little time as they went in search of a third killer goal. Saviola fed Rodriguez in space. He took a touch to steady himself before clipping the ball over the crossbar.

55': Villarreal playmaker Riquelme continued to cause havoc for Côte d'Ivoire with his crosses. He came close to scoring directly from a free-kick near the corner flag as his pacy curling delivery evaded everyone and almost crept in at the far post.

59': Ivorian substitute Aruna Dindane crossed for Drogba, but the Côte d'Ivoire skipper could not get enough power on his downward header and Argentina cleared the danger.

70': Drogba showed great power and determination in the box to shield the ball well from the Argentine defence and try to get a shot in. The attempt fell to Keita, who in turn squared it to Arouna Kone, but he could not keep his shot down.

72': Yaya Toure had a free-kick partially blocked from the edge of the area, but Drogba came close to turning the ball in for the Africans, although he guided his volley wide.

82': The Elephants got the goal their efforts richly deserved and the inspirational Drogba was the man who eventually claimed it. He was twice involved in a move which saw him head the ball away from goal instead of at the target, but when Bakary Kone crossed it back to the Chelsea star, he steered it into Argentina's net (2-1).

85': Amid intense pressure at the other end, Rodriguez believed he had made the game safe for Argentina by lifting the ball over Tizie and guiding it home, but play was pulled back for an offside flag.

In conclusion:
Argentina held on for a precious victory in a classic end-to-end encounter, but Côte d'Ivoire were desperately unlucky not to claim in a point in a frenetic finish.