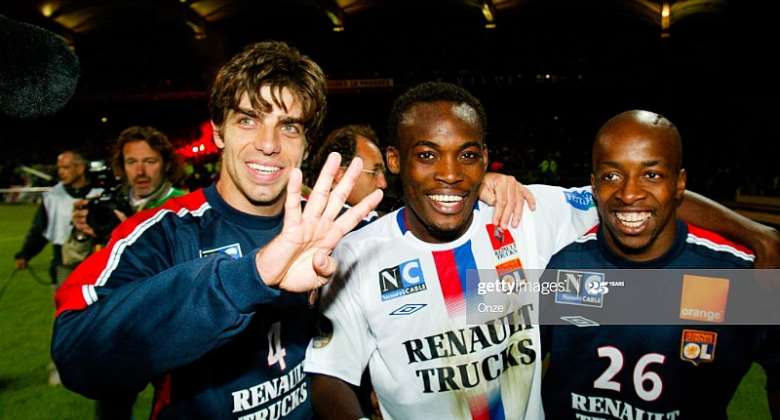 Former Ghana and Chelsea midfielder, Michael Essien has admitted that he was stunned after winning Ligue 1’s Best Player award in 2005 when he played for Olympique Lyon.

The midfield gem joined Lyon from Bastia in 2003 and went on to make 71 appearances for the Les Gones including a run in the UEFA Champions League in 2005 that ended with a penalty shootout loss to PSV in the last 8.

Essien missed only one in the season and his performances for the club got the approval from his fellow players in the league in the form of the best player award.

Speaking to SuperSport anchor, Carol Tshabala, on Sunday in an interview on Instagram, the former Real Madrid and AC Milan ace admitted that he was stunned to win the award ahead of players he considered better than he was like Brazilian midfielder, Juninho.

“To be honest, I was not paying to individual awards because I was just enjoying my football. I did not even want to go to the players’ awards night when I was invited but some of my teammates were going so I had to be there too

"I was very surprised when I won the award. I did not know that my mother and my sisters had been interviewed in Ghana and I was emotional when I see the interviews being played. I was happy but I was emotional too.

"Winning the Best Player award in France at the time was great. I was in competition with my teammate Juninho and he was a magician with the ball and so, to be ahead of him was remarkable,” he added.

The award opened the door for Lyon players to win the Best Player awards in France until 2008 when Karim Benzema became the last Lyon player to be the toast of French football.

Essien was with Lyon between 2003 and 2005 before heading to Chelsea in a 24.4 million pound transfer.