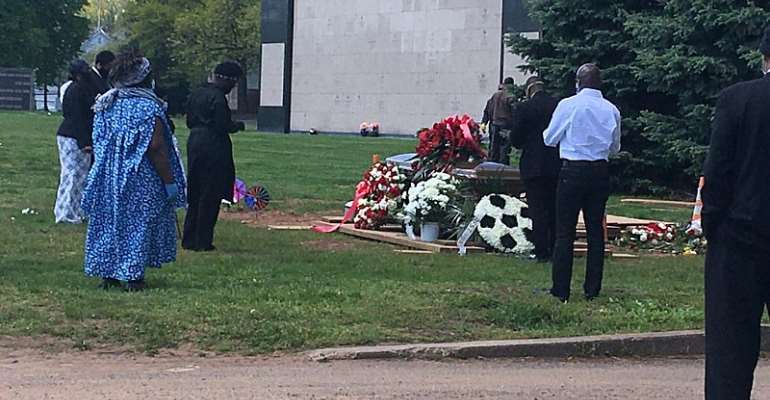 The late Ghana goalkeeper Emmanuel Anue Kofie has been laid to rest in the USA on Wednesday, May 13, 2020.

He was buried at the Hollywood Memorial Cemetery.
The former Asante Kotoko and Great Olympics goalkeeper who also played and coached in the United States of America passed on at the age of 77 in New Jersey on May 2, 2020.

Following regulations governing the COVID-19 pandemic, a few family members made up of his children, cousins and a few family friends graced the occasion amidst observing safety measures against the pandemic.

Nicknamed the ‘Black Cat’ during his days with Asante Kotoko, Kofie died on Saturday after battling illness for some time.

Born on February 10, 1941, Mr Kofie, kept the posts for the Black Stars between 1966 and 1969, played for the National Academicals team, Accra Great Olympics and later Asante Kotoko, before moving to New York Cosmos in the USA.

Mr Yoofi Boham, a friend of the late Kofie and keen sports enthusiast said the nation’s great sports personalities must be remembered. He called for a Sports Hall of Fame where the most distinguished sports heroes can be remembered.

According to Boham, Anue Kofie was a legend having featured for the Black Stars, Kotoko, Olympics and played with Brazilian Arantes do Nacinmento, the great Pele who won the FIFA World Cup.