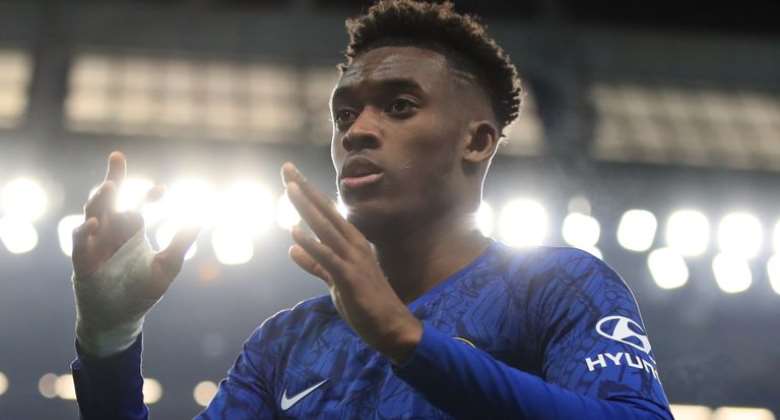 ENGLAND striker Callum Hudson-Odoi was arrested today while breaching lockdown at 4am with a model he had met online.

Officers went to the 19-year-old Chelsea star’s West London penthouse after a woman rang police and an ambulance.

Hudson-Odoi, who has had coronavirus, is said to have asked her to visit him wearing lingerie.

It is believed the 19-year-old made contact with the woman on social media on Saturday before inviting her to his penthouse.

Chelsea winger Hudson-Odoi and the model are said to have exchanged flirty messages that hinted at having “fun” together.

The woman showed him a selection of photographs of herself in raunchy outfits.

Hudson-Odoi, who tested positive for Covid-19 in March, is thought to have sent a car to collect her for a trip across the capital to his West London home.

But a woman later called for an ambulance and the police.

"She looked very glamorous, like the sort of girl you’d see on Love Island," a Neighbour said.

A neighbour of Hudson-Odoi’s said the model had arrived at the building about 8pm on Saturday, adding: “She looked very glamorous, like the sort of girl you’d see on Love Island.

“She had very posh Louis Vuitton luggage with her.”

The neighbour added: “The place has been crawling with police.

“A spa area on the roof has been taped off but I’ve no idea if that’s the same incident.”

Another resident said: “There have been a few gatherings happening but we didn’t know quite who was responsible.

“There are a couple of footballers in the building — but in the early hours of last night it all kicked off and the police were called.”

Paramedics attended early yesterday alongside the police officers who arrested the footballer. The model was taken to hospital after complaining of feeling unwell.

A further five officers arrived at around 2.30pm in an apparent search operation.

The Metropolitan Police said: “Police and London Ambulance Service were called at 03.53hrs on Sunday 17 May to a report of an unwell woman.”

The Met said a woman was taken to hospital and a man, who was arrested at the scene, remained in police custody.

The incident comes days after The Sun revealed that a different Premier League star had been accused of breaking the lockdown by attending a sex party in Paris.

Hudson-Odoi has been described as “a world-class player” by Chelsea manager Frank Lampard. He is the latest big-name footballer to be caught breaching lockdown regulations.

Fellow England star Kyle Walker is facing disciplinary action from his club Manchester City for paying two prostitutes to visit him at his home.

Walker and a friend paid escort Louise McNamara and a 24-year-old Brazilian woman £2,200 for a sex party, a clear breach of social ­distancing guidelines.

The defender later apologised for “letting down” fans and family. Manchester City have begun a disciplinary procedure.

Aston Villa captain Jack Grealish was fined by his club for visiting a friend. And Everton striker Oumar Niasse was labelled “a disgrace” by police after he was caught out driving with three friends during the lockdown in March.

English football hopes to be back up and running behind closed doors soon, with plans to finish the domestic season this summer.

League officials and several top figures are keen to follow in the footsteps of Germany’s top-flight Bundesliga, which returned to action at the weekend. But players’ groups have raised safety concerns.

Hudson-Odoi’s Chelsea team-mate Willian is among those reluctant to agree to Project Restart.

He said: “Honestly, from what I can see, a lot of players, the majority, I’d say, are uncomfortable with the idea of returning right now. We’re really keen to return, we really miss playing and doing what we love.

“But it needs to be safe for us. That’s how we’re looking at it.

“So right now, players don’t feel comfortable with the idea of returning until it’s totally safe to do so.”