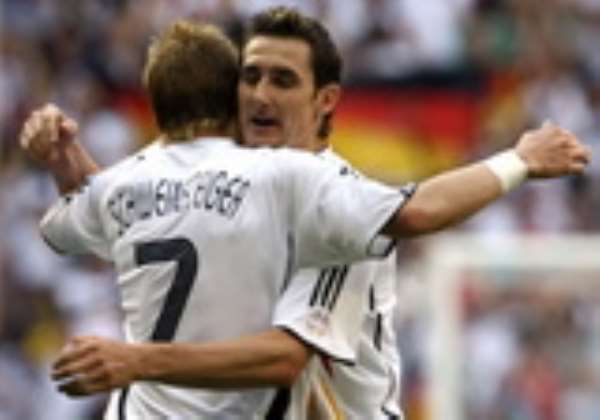 Klose, celebrating his 28th birthday, made it 3-1 after 61 minutes and although Wanchope narrowed the deficit with his second goal on 73 minutes, Jurgen Klinsmann's men secured the three points through Torsten Frings' spectacular drive three minutes from time.

The match:
3': Germany's Torsten Frings fired the first shot at the 2006 FIFA World Cup, a dipping effort which had Costa Rica goalkeeper Jose Porras well beaten, but the ball just cleared the crossbar and landed on the roof of the net.

6': The Mannschaft got off to a fantastic start as full-back Lahm cut inside on the left flank and curled a beautiful drive which clipped into the net off the far post to send Germany into an early lead (1-0).

12': After weathering the storm, Costa Rica provided the perfect riposte as Ronald Gomez released Wanchope who beat Germany's offside trap, sprinted clear and composed himself before sliding the ball past goalkeeper Jens Lehmann to score the equaliser (1-1).

17': Germany went in front again in probably the most spectacular start to an Opening Match in the rich history of the finals. Team captain Bernd Schneider fed Bastian Schweinsteiger from near the corner flag and his cross from just inside the area was turned home by Klose from two metres out to restore Germany's advantage (2-1).

24': Klose tried his luck from distance and Porras had an anxious moment as the drive bounced back off his chest but there was nobody in a white shirt on hand to capitalise on the rebound.

38': Wanchope provided Germany with a worrying moment of their own as he found himself in space again and lobbed the ball over Lehmann, but his attempt floated wide and play was called back for an offside flag against the striker.
40': German forward Lukas Podolski curled a left-footed free-kick just over the top from 18 metres as the relentless pace of the first half had the crowd in Munich on the edge of their seats.

No let-up:
46': The second half was barely 30 seconds old when Germany came charging at Costa Rica again, with Podolski cracking in another fierce drive which Porras was happy to see fly a metre over the centre of his goal.

48': The Ticos were in no mood to sit back and let Germany dominate proceedings and Danny Fonseca managed to beat the markers to a cross and send a diving header flashing past Lehmann's right-hand post.

55': Porras had to be alert and athletic as he sprinted off his line to gather a dangerous pass which Per Mertesacker was hoping to make the most of.

61': Germany increased their lead as Klose, one of the strikers tipped to challenge for the adidas Golden Shoe, scored his second goal of the 2006 FIFA World Cup and his seventh in the finals overall. From Lahm's teasing cross, the ball looped up off Costa Rican defender Michael Umana and although Klose's initial header was well saved by Porras, the Werder Bremen player followed up to lift it high into the net (3-1).

73': With echoes of the first half, Wanchope matched Klose by once again skipping through Germany's defence courtesy of a delicate chipped pass by Walter Centeno and wrong-footing Lehmann, who was left exposed for a second time (3-2).

79': Mertesacker forced a great save out of Porras by rising highest from a corner and sending a firm header toward goal, but the Costa Rican keeper was equal to it.
87': Werder Bremen provided the goalscorer again as midfielder Frings put the icing on the cake of a truly spectacular Opening Match with an unstoppable drive into the corner from some 25 metres (4-2).

In conclusion:
Germany made the best possible start to the finals with three points and a healthy return of four goals, but there will be questions raised about their offside tactics after being caught out twice at the back.