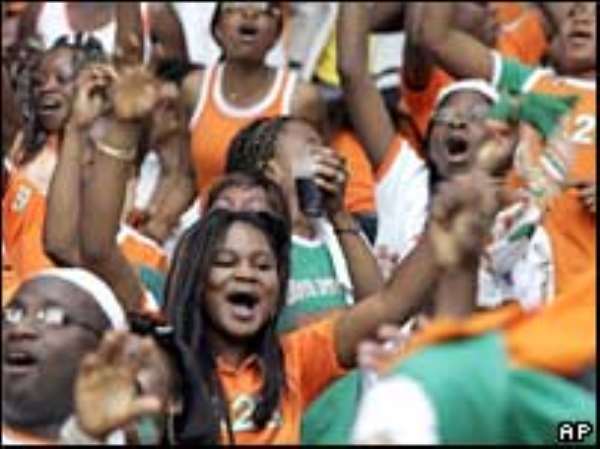 For Ivorians, the hopes for their team at the World Cup in Germany stretch far beyond the football pitch.

"If Ivory Coast wins the cup, there will be peace, everyone will come together and there will be no more problems," says football fan Germain Yao Konan, reiterating the wishes of many living in the deeply divided country.

Ivory Coast has been cut in two by civil war since September 2002, with rebels controlling the north and the government the south.

The resulting social and economic crisis has plunged a country held up as a West African example into a deep trough it is struggling to get out of.

One of the main reasons for the war is the dispute over Ivorian identity, with northern Ivorians frequently saying they are discriminated against.

That is where football comes in: the players for the Elephants, as the national team is known, come from all over the country.

Those from the rebel-held north and the government-controlled south play together, celebrate together, and show a positive image of Ivory Coast that is sorely lacking elsewhere.

"When we play all of Ivory Coast is happy," Elephants' midfielder Yaya Toure told the BBC recently.

"I really believe we can bring peace through our play on the field."

However, older heads are more cautious.

"Football and the World Cup can be a major fact in bringing us together," says Minister for National Reconciliation Sebastian Danon Djedje.

"When the national team plays everyone forgets who they are and who they are with and lose themselves in the goals and the artistry. So it can certainly help

"But we shouldn't have too many illusions - we have deep problems here and football cannot solve all of these," he says.

That is not to say the state is beyond using the World Cup as an opportunity to get some positive press.

The sports minister has decorated the mothers of the 23 Elephants who will defend their country's colours in Germany with medals for their services to the nation.

In fact, scarcely a day goes by without some sort of official ceremony to boost the team or stress supporters' loyalty.

All over the country, the nation's orange, white and green flag can be seen.

Every bar with a television is advertising its ability to put on a show for the first game - Ivory Coast versus Argentina - on Saturday.

Up in the north, the New Forces rebels have plans to install a big screen TV in the football stadium in their stronghold of Bouake.

They will be cheering on Ivory Coast as much as their southern adversaries.

"When you look at the situation in the country, already qualifying for the World Cup is a great step towards peace. I think they will represent the country honourably," says Dramane, an Ivorian of Burkinabe origin.

"I have 100% faith in the team," adds fellow fan Germain Yao Konan.

Such faith may not end Ivory Coast's crisis and resolve its many problems, but at least for once the entire country will be supporting the same side.