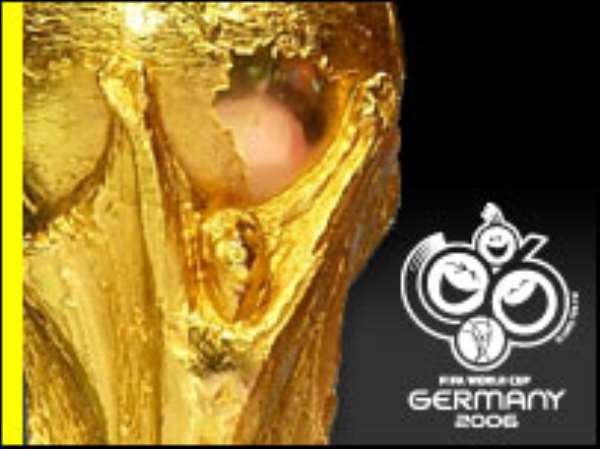 The world's best players are converging on Germany for the biggest sporting event of the year - the World Cup.

In the space of 31 days, 32 teams will play 64 matches culminating in the showpiece final in Berlin on 9 July to determine the best in the world.

Brazil go into the tournament as favourites and have enjoyed a textbook build-up which has done little to dissuade people from tipping Ronaldinho and co to secure a sixth title.

Elsewhere metatarsal mayhem has reaped havoc on the back pages in England with Wayne Rooney, the Dutch dossier of injuries seems to be growing and the Ecuadorians are complaining about the weather.

ModernGhana Sport rounds up the state of play in each camp on the eve of the tournament.

The world's best players are converging on Germany for the biggest sporting event of the year - the World Cup.

In the space of 31 days, 32 teams will play 64 matches culminating in the showpiece final in Berlin on 9 July to determine the best in the world.

Brazil go into the tournament as favourites and have enjoyed a textbook build-up which has done little to dissuade people from tipping Ronaldinho and co to secure a sixth title.

Elsewhere metatarsal mayhem has reaped havoc on the back pages in England with Wayne Rooney, the Dutch dossier of injuries seems to be growing and the Ecuadorians are complaining about the weather.

BBC Sport rounds up the state of play in each camp on the eve of the tournament.

Costa Rica
Costa Rica are capable of upsetting the best - ask Scotland - but not on present form. Losing matches to Iran, Ukraine and the Czech Republic is one thing, but a 3-2 defeat to a German regional team made up of third, fourth and fifth division amateurs is quite another and does not bode well. The Ticos often blow hot and cold, but their form is close to freezing point going into the tournament.

# Verdict: Tricky opponents on their day and may nick a surprise win that could prove enough to take second place in a wide open group. But will their day come in Germany?

Ecuador
The Ecuador squad - who are notoriously bad travellers - are in dire shape. But coach Luis Fernando Suarez has remained positive in the build up, declaring: "I'm happy with the way we are playing". How can he be? Most recently they lost to Macedonia while the squad are complaining about the German climate, in between bouts of sneezing.

# Verdict: Don't have a sniff of a chance. A lack of European experience will count against them.

Germany
In an attempt to get inside their opponents' heads the squad have been shown a film about Costa Rica. "It was highly educational," said skipper Michael Ballack. "We loved getting an insight into their culture." Training with a difference and at the moment the remote is all Chelsea's new boy can control as he is struggling with a calf injury which is causing consternation. Germany need their talisman in Munich and a solid start.

# Verdict: A gimme of a group but, despite playing at home, this is a World Cup too soon for a promising group of players.

Poland
Coach Pawel Janas has a touch of Eriksson-itis about him. Strange squad selections - no Tomasz Frankowski or Jerzy Dudek - and he has seemingly lost his tactics book. The win over Croatia was a vast improvement on the defeats to Colombia and Lithuania and, as a result, the tried-and-trusted 4-4-2 has gone in favour of a five-man midfield.

# Verdict: A favourable draw means the second round is a distinct possibility, but they are unlikely to feature in the latter stages of the competition.

England
Wayne Rooney's injury threatened to destabilise the England camp but Peter Crouch's fine form, goals and dancing, have lifted the camp's morale. The sight of Rooney back in training will have also given the squad a timely confidence boost and they've been scoring freely in recent outings. But there still seem to be uncertainties over formations and Michael Owen is short of match fitness.

Paraguay
With Sweden in mind they have recently struggled against Scandinavian opponents and Paraguay's options up front are looking limited. Experienced striker Jose Cardozo, who was Paraguay's leading scorer in qualifying, has pulled out through injury and Roque Santa Cruz has been hampered by a knee problem. Without goals a place in the knock-out stages will slip through their hands.

# Verdict: Should not be underestimated, and, while their defence is not as strong as past years, another second round appearance is a possibility if the goals come.

Sweden
Sweden look to have hit a downturn in form at the wrong time and two dour draws have led to mounting criticism. The right-back position remains a worry, Zlatan Ibrahimovic is struggling for form and confidence and Freddie Ljungberg has a niggling foot injury. All of this means the Swedes will be relying on Henrik Larsson to once again provide the inspiration.

# Verdict: Will still be confident of coming through the group, particularly since they have not lost to England since 1968, and could cause a knock-out surprise.

Trinidad & Tobago
The Soca Warriors have endured losses to a young Wales team, Slovenia and the Czech Republic. Surprisingly coach Leo Beenhakker has declared his side being in "good form" but he must be worried with their inability to deal with the height of Czech striker Jan Koller, particularly with England's Peter Crouch likely to start in game two. Regular defender Marvin Andrews has recovered from injury just in time to feature.

# Verdict: A win would send the country into meltdown. More patronising comments about how plucky the Soca Warriors are will send the rest of us into meltdown.

Argentina
Look to have a good chance of getting past the quarter-finals for the first time in the post-Maradona era. Manchester United's Gabriel Heinze and Barcelona's Lionel Messi, billed as "the new Maradona", are fit in time to face the Ivory Coast in their opener and coach Jose Pekerman has a wealth of wondrous talent at his disposal - including chief orchestrator Juan Roman Riquelme

# Verdict: It is hard to see them winning this time, but could go close if Riquelme and Messi fire.

Holland
Preparations have been blighted by a bout of injuries and standby squad players are packing their bags and heading to the team hotel, just in case. A narrow win over Cameroon and a draw against Australia suggest the Dutch need their walking wounded to recover, and quickly. However, Ruud van Nistelrooy, so unloved at Manchester United, appears to be nearing top form at just the right time.

# Verdict: Look a little wet behind the ears, the injuries do not help and look likely to fall just short this time.

Ivory Coast
The only squad without a single player based in their homeland, the Elephants' build-up to their World Cup bow is gathering pace nicely after a 3-0 friendly win over Slovenia. It was their first victory in three warm-up ties, in which Chelsea marksman Didier Drogba scored a brace. A draw against Switzerland in an earlier friendly led Swiss coach Kobi Kuhn to declare the Ivorians as being "definitely the best team in Africa".

# Verdict: Stand a good chance of reaching the last eight - if they can get out of their tough group - and the best bet of the African teams.

Serbia & Montenegro
The call-up and subsequent withdrawal of coach Ilija Petkovic's son Dusan - who claimed he could not cope with the outcry and suggestions of nepotism that greeted his inclusion - is representative of an unsettled squad. Defender Nemanja Vidic is banned for the opener against Holland, but Mateja Kezman is back from injury. A 6-0 romp over the 'might' of a Carynthia province select team in St Veit, Austria provided a welcome confidence boost.

# Verdict: Resilient defence makes them difficult to beat, but unlikely to get past the last 16, if they make it that far.

Angola
"Since we've been in Germany, some days have been warm but most have been cold. Today it's cold and I don't like it." The Angolans, and in particularly Luis Delgado, are unhappy. It will probably only get worse when they start playing football. At the African Cup of Nations they recorded just one win, against a woeful Togo, and have since beaten only Mauritius and Lesotho. Hardly the stuff to get Mexico and Portugal quaking.

# Verdict: An unknown quantity, but the step up to the World Cup stage will prove too big.

Iran
Iran's build-up to the tournament has been dominated by knee issues. Ali Karimi suffered a knee ligament injury in March and Vahid Hashemian went down with a knee injury in March. The good news is they are in line to play, as is recently-outed bigamist and thigh-injury victim Mehdi Mahdavikia. All three need to be firing on all cylinders if Iran are to make an impact.

# Verdict: Luck will be Iran's crucial bed-fellow if they are to make any sort of impact.

Mexico
Mexico are winning a lot of support as potential dark horses - there's always one. But they tend to go lame against the best, as highlighted by recent losses to France and Holland. Despite those defeats coach Ricardo La Volpe, who caused uproar at home by omitting striker Cuauhtemoc Blanco from his squad, remains upbeat and insists his side have kept their powder dry by not showing off all their set-piece ploys.

# Verdict: An easy group but will need more than deadly dead-ball delivery to prosper thereafter. Just outside the group of five or six teams who can realistically win.

Portugal
The friendly win over Luxembourg was their 14th consecutive game without defeat - a new Portuguese record. But they blew it at home in Euro 2004 and the remnants of the golden generation are losing lustre and becoming more geriatric by the year. Maniche and Costinha have struggled to play regularly for their clubs this term and coach Luiz Felipe Scolari has concerns over Cristiano Ronaldo's temperament.

# Verdict: Portugal still boast plenty of talented players but are unlikely to equal their Euro 2004 exploits in reaching the final.

Czech Republic
The team ranked second in the world have a host of injury problems. Rangers midfielder Libor Sionko has been called up in place of Vladimir Smicer, while Aston Villa striker Milan Baros, Arsenal new boy Tomas Rosicky and fellow midfielder Tomas Galasek are carrying knocks. On the plus side Jan Koller is back from injury. On the down side, apart from those injuries, this team are getting old together - maybe too old.

# Verdict: With their talent they could beat anybody, but their all-out attacking attitude could come unstuck.

Ghana
The squad was much changed from that taken to the African Cup of Nations, but coach Ratomir Dujkovic has enjoyed an injury-free and encouraging warm-up. They embark on their first World Cup off the back of a run of three games unbeaten. In the last of those matches the Black Stars brushed aside 2002's fourth-placed side South Korea 3-1. Goals have come from a range of sources but midfielders Michael Essien and Steven Appiah remain at the forefront of their play.

# Verdict: Qualifying from the group will be a real success.

Italy
A terrible build-up, barring Francesco Totti's recovery from injury. Fraud and match-fixing scandals have rocked the sport in Italy, while in Germany they will go into their first match against Ghana without first-choice defenders Gianluca Zambrotta and Alessandro Nesta. But as the Roman poet Horace said: "Adversity has the effect of eliciting talents which, in prosperous circumstances, would have lain dormant." Should be all right then!

# Verdict: After two disappointing tournaments Italy will be determined to make their mark in Germany. If they gel they are capable of going all the way.