Ballack out of World Cup opener 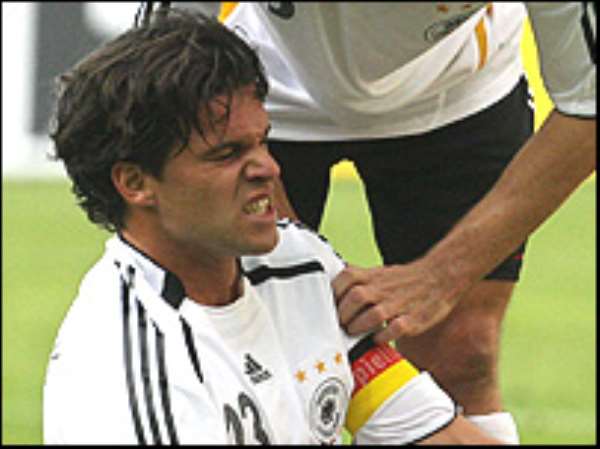 Germany captain Michael Ballack has lost his battle to be fit for the host's World Cup curtain-raiser against Costa Rica on Friday.

The new Chelsea midfielder sustained a calf injury in a friendly against Colombia on 2 June and was forced to pull out of training on Wednesday.

Germany coach Jurgen Klinsmann said: "He's our leader and our skipper and we hoped to have him available.

"But it's a pity not a problem, we're in great shape without him."

Ballack was cleared to join in the Wednesday training session, his first since picking up the injury.

But after the talismanic midfielder pulled out of the session, Klinsmann stuck by his policy of not selecting anyone who could not train 48 hours before a match.

Werder Bremen midfielder Tim Borowski and Borussia Dortmund's Sebastian Kehl will battle it out to replace Ballack, whose target is to make Germany's next group match against Poland on Wednesday 14 June.

Klinsmann added: "It's more important for us to get him back in shape so that he can rejoin practice and get in shape for the next matches."