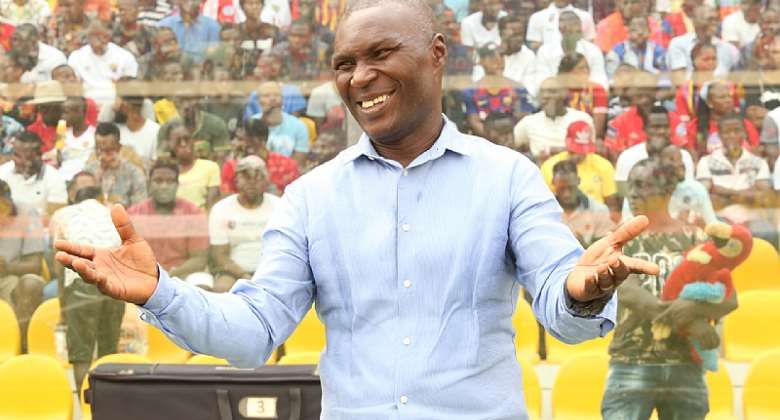 Hearts of Oak striker, Bernard Arthur has taken a swipe at head coach of the club, Edward Nii Odoom, accusing him of having 'no balls'.

Arthur have endured a torrid time since joining the Phobians from Liberty Professionals before the start of the 2019/20 Ghana Premier League season.

He joined the club during the regime of Kim Grant.
The 23-year-old has managed to score only once this season and has seen a limited number of matches after match week 14 in the 2019/20 Ghana Premier League and he sees Olympics as the club who will give him the much playing time he is aspiring for.

Speaking to Asempa FM, Arthur blasted the former Tema Youth trainer for not being fair to him in his decision to axe him to the bench.

Bernard Arthur
"Coach Nii Odoom has not been fair to me," he said. "He does not have balls and that is the truth.

"I have worked with top coaches like Sam Adday, CK Akonnor and expatriate coaches. If you don't want a player, be bold and tell him I don’t like you and it can be in the form of text message but you don't make a mockery of the player whiles he wants to play.

"I am a registered player but I don't get playing time meanwhile, unregistered players are playing but during league matches, the coach will call you and introduce you to the game the dying minute of the game.

"People think I am not in good form but I have not been able to train properly since I joined Hearts of Oak and it has affected me.

"I made a huge impression against Liberty Professionals and Great Olympics and I was expecting to maintain my place in the team but he dropped to the bench against Kotoko.

"I am not happy with the treatment at the club," he added.

Arthur also revealed that he has communicated to the club that he wants to leave due to the lack of playing time.

Before he joined Hearts of Oak, Bernard played for Algerian side AS Aïn M'lila and Tanzanian's Azam FC where he failed to impress.