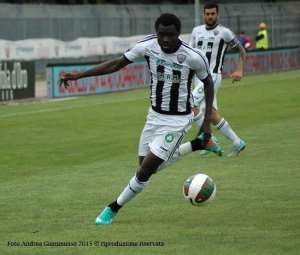 Former Ghana U-20 Footballer, Bright Addae, currently a defender for Serie B side Juve Stabia, has pleaded with Black Stars coach to consider players in the Italian second-tier league for national team selection.

Speaking emotionally in an interview with Amansan Krakye on Radio Central in Cape Coast, Bright Addae who won the U-20 World Cup in 2009 revealed,

He said "When they come to monitor Ghanaian players in Europe, I will kindly entreat Coach C.K Akonnor to also consider players who play in the Italian Serie B.

"Because I'm not the only one but there are other Ghanaian players who are very experienced, talented, and perform very well in the Serie B for different clubs.

"I have heard on countless occasions that Black Stars coach is coming to Europe but I don't know whether when they come they have some particular players they come to monitor.

"But what I'm saying is that it's not only Serie A that we have Ghanaian players who are doing well. There are top-notch Ghanaian players also in the Serie B who are eager to serve their country wholeheartedly when invited to play for the national team.

Bright Addae has gained much experience in the Serie B after making a lot of appearances for the past six seasons and claims that the second tier Italian league is more difficult than the Serie A.