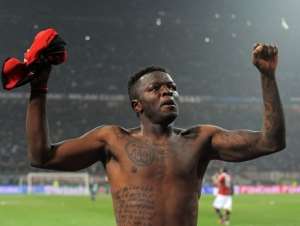 The Founder of Konongo-based Owerriman Football Club, Nana Batafo Acheampong Nti, has implored Ghanaian International, Sulley Ali Muntari, to support the development initiatives of the Konongo Municipality to enable him to leave a legacy as a true son of the community.

“Muntari has virtually neglected the community which propelled him to stardom. Besides failing to undertake any project at Konongo that would endear him to inhabitants, he has also abandoned Owerriman FC - the Division Two side that offered him the platform to nurture his talent in football.

“He started playing at a tender age at Owerriman before being transferred to Liberty Professionals in Accra in 2000 and was invited to play in the national U-17 side. A year after, he got the opportunity to play professional football with Udinese in the Italian Serie A,” Nana Acheampong Nti who is also the Chief of Konongo, recalled during an interview with the Graphic Sports Online.

Describing the attitude of Muntari as unfortunate, the Konongo chief, however, commended Black Stars’ General Captain, Asamoah Gyan, Emmanuel Agyemang Badu and John Boye who have established foundations and initiated various projects in deprived communities in Ghana to support the citizenry in various ways.

“Muntari has progressed from Division Two side Owerriman to play at the highest level, including Udinese, Portsmouth, Inter Milan, AC Milan, Sunderland and Ittihad of Saudi Arabia among others. He has now established himself as one of the finest footballers in his generation.

“Just as Cristiano Ronaldo, Lionel Messi and other Ghanaian footballers are helping their people, especially in this era of the COVID-19 pandemic, Muntari should realise that his community, peers and the team that gave him the platform to market his potential in football are also yearning for his support in various ways,” Nana Nti stated.

Muntari, who was known as ‘Bobfti’ during his days with Owerriman, was first invited to the Black Stars in 2002 and has since featured in the FIFA World Cup tournaments in Germany in 2006, South Africa in 2010 and Brazil in 2014.

Before then, he first represented Ghana with the Black Starlets at the 2001 Meridian Cup and has so far scored 20 goals in 84 appearances for the Black Stars.

He earned his first senior cap against Slovenia on May 17, 2002, and became a regular member of the Black Stars.

Muntari was selected into Ghana’s Olympic team for Athens 2004 but was sent home on disciplinary grounds which created a dispute between him and the Ghana Football Association (GFA), leading to his premature retirement which made him the youngest player to retire from football.

He, however, rescinded his decision later and rendered a public apology to the GFA, paving the way for him to participate in the Germany 2006 FIFA World Cup.