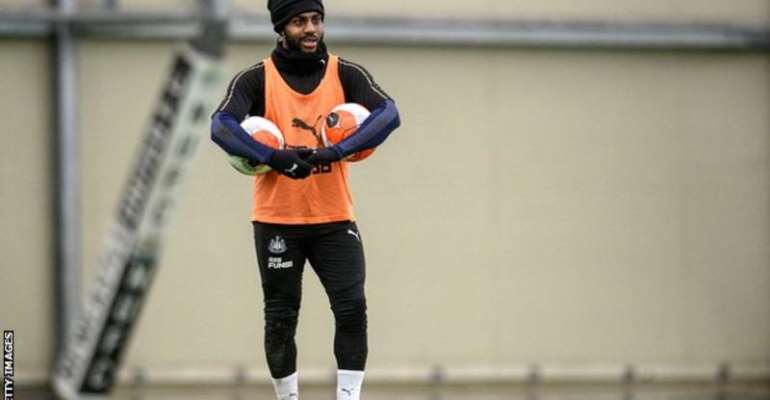 England and Tottenham defender Danny Rose has criticised the Premier League's plans to restart the season amid the coronavirus pandemic.

Club officials met on Monday to continue talks on "Project Restart", with the English top-flight aiming to resume fixtures on 12 June.

"Football shouldn't even be spoken about until the numbers have dropped massively," said Rose, 29.

"People's lives are at risk."
In other developments on Tuesday, the BBC learned the Professional Footballers' Association has heard from a number of players who have "real concerns" about restarting the season, while London mayor Sadiq Khan has said it is "too early" to discuss restarting sport in the capital.

No professional sport, even behind closed doors, will be staged in England until 1 June at the earliest.

Speaking in the House of Commons on Monday, Prime Minister Boris Johnson said being able to hold sporting events without fans could "provide a much-needed boost to national morale".

Rose, who is on loan at Newcastle United from Spurs this season, responded to the news on social media, using expletives and saying he did not care about the nation's morale.

Meanwhile, new data from YouGov showed 73% of 2,098 British adults surveyed would not see the return of football as a boost to their morale, with 19% saying it would.

Players are being consulted on proposed medical protocols for a return to training by the Professional Footballers' Association (PFA). They have been given a condensed version of a 40 page document for them to digest.

The BBC understands the PFA has heard from a number of players, especially those who have underlying health conditions like asthma or are from black and minority ethnic (BAME) backgrounds, that they have real concerns about returning to playing.

Black men and women are nearly twice as likely to die with coronavirus as white people in England and Wales, according to the Office for National Statistics.

On Wednesday, there will be a meeting between players, the Premier League, medical staff and the PFA who will give their concerns and opinions as will the players.

On Saturday, a third Brighton player tested positive for coronavirus.

Manchester City and Argentina striker Sergio Aguero has previously said players are "scared" about the prospect of returning to action amid the pandemic.

His City team-mate Raheem Sterling shared his concern on his YouTube channel on Monday.

The England forward, 25, said: "The moment we do go back it just needs to be a moment where it's not just for footballing reasons; it's safe for not just us footballers but the whole medical staff, referees.

"I feel like once that side of the people's safety and the players' safety is secured, and their wellbeing is looked after, then that's the right time to go back in.

"Until then, I'm. - how can I say - not scared, but reserved and thinking what the worst outcome could be.

"I've had friends whose grandmas passed away. I've had family members as well that have passed away. You've got to be wise and take care of yourself and those around you."

Two weeks ago clubs were told neutral stadiums were the only way the season could be completed because authorities were concerned about fans congregating outside home grounds and breaching social-distancing rules.

A significant majority of the clubs are understood to be opposed to the proposal, with Watford, Aston Villa and Brighton coming out publicly against it.

On Monday, the Premier League said it had listened to the objections of some clubs to the use of neutral grounds if the season resumes, and will support them in putting those views to the authorities.

Deputy chief constable Mark Roberts, national police chiefs' council football policing lead said on Tuesday that after a meeting between the police, government and football bosses a "range of options" are being explored to "identify a way forward, which minimises any risks to public safety and unnecessary pressure on public services but facilitates a sensible restart to the season, to support the economic and morale benefits associated with the sport."

While Khan has said it is "too early to discuss resuming the Premier League and top-flight sport in the capital".

A spokesperson for the mayor said: "It can only happen when it is safe to do so - and it cannot place any extra burden on the NHS and emergency services.

"Sadiq is also concerned about the welfare of players competing in all professional sports, not just football. There are huge questions to be asked how players could train safely, how they would travel to matches and how they could play competitive matches without the risk of spreading infection."