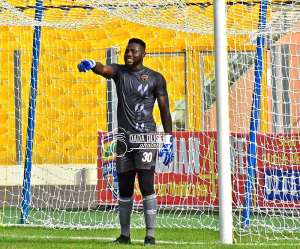 Hearts of Oak goalkeeper, Richard Attah, has revealed that was inspired by his maiden call-up to the Black Stars team two months ago for the 2021 Africa Cup of Nations qualifier against Sudan.

Due to the outbreak of coronavirus, the game has been rescheduled by CAF.

And according to the former Elmina Sharks goalkeeper, it was a big motivation and the realisation that he needed to work even harder to justify the trust reposed in him by Coach Charles Akonnor.

"I will always cherish my first Black Stars call up. It was a great inspiration for me and it has even made me work harder as my effort has been recognised," Attah told the Graphic Sports.

In 12 league games, he has conceded eight goals but maintained a clean sheet in four matches, exploits which have helped put Hearts in the ninth position on the league log.

As his stock continues to rise, the goalie has set for himself some lofty targets with the club.

"I have my sight fixed on winning both the Premier League and MTN FA Cup with Accra Hearts of Oak. We have a great squad and I believe with hard work, it is very feasible," he added.

Attah joined Hearts of Oak from Elmina Sharks ahead of the 2019/20 Ghana Premier League season.