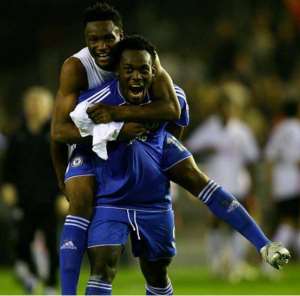 Former Kenya international, Charles Okwemba, has emphatically said the comparison between Michael Essien and Mikel Obi is misplaced because the Ghanaian is the better player by far.

Essien joined the Blues in 2005 from French Ligue 1 side, Lyon.

The 36-year-old won the heart of the fans and went on to make 168 appearances for the London-based side and spent nine years at the club, scoring 17 goals in the process.

“Every coach would love to have a combative midfielder like Essien in his team,” Okwemba told Goal on Friday.

“He was a very powerful and energetic box to box midfielder who played passionately and hated losing. One thing with him was his work rate; it was why he was loved at the club and went on to be an asset for the team.”

“Essien was a great tackler and adapted fast with the situation on the pitch, but his consistency and attitude always worked for him.”

The 40-year-old has explained why he will go for the Ghanaian at any given time as opposed to another former Chelsea midfielder, former Nigeria captain John Obi Mikel.

“Mikel yes was talented but is nowhere close to Essien; the latter, literally, fought to help his team. No wonder [Jose] Mourinho signed him for Real Madrid.

“If given chance, I will choose Essien for my team over Mikel, no two ways about it.”

Essien and Mikel Obi both played for Chelsea and won many laurels.