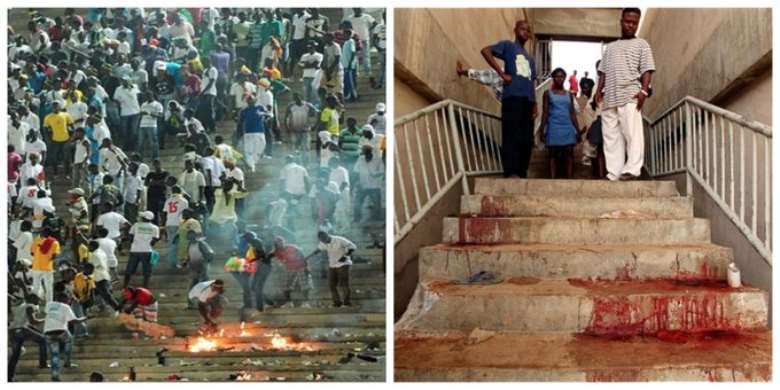 Today in History, exactly 19 years ago, On May 9, 2001, 127 Ghanaian football fans died in a stampede caused by the firing of teargas by police following a decision by the referee in a crucial match between arch-rivals Accra Hearts of Oak and Kumasi Asante Kotoko at the Accra Sports Stadium known as the May 9 Disaster.

May 9 disaster is undoubtedly the saddest day in Ghana Sports after 127 Ghanaian football fans died during a Premier League fixture between Accra Hearts of Oak and Kumasi Asante Kotoko.

It remains the worst 90 minutes in African football history. Screams and wails could be heard from a country mile. The streets of Accra were dead silent too, as all the rowdiness, noise and attention switched to the various hospitals and clinics in Ghana’s capital, Accra.

Officials were anticipating crowd disturbances and had taken extra security measures. With less than 15 minutes to go in the game, two goals in quick succession put Hearts 2-1 ahead with striker Ishmael Addo scoring late in the game to seal the result.

However, the scoreline and the manner in which the winning goal came did not amuse a section of the Kumasi Asante Kotoko fans.

The away fans thought their team deserved more; others felt they were undone by poor refereeing decisions. Emotions were high, tempers fled, friendly banters became petty complaints, disapprovals turned to protests and, tensions soon escalated into hurling of missiles.

Angry Asante Kotoko fans ripped up plastic chairs and hurled them on to the pitch.

The police responded with tear gas into the stands. Gates were locked tightly. The fans had nowhere to seek refuge.

They were trapped. Stampede ensued. Hell broke loose. Death was on rampage.

The fans tried to run for their lives but they had no escape route. One hundred and twenty-seven, 127 Ghanaian football fans died as a result of the stampede. They died of compressive asphyxia.

Both the dead and unconscious were mixed and bundled together into car trunks and ambulances, and rushed to major hospitals. Inept, immobile bodies of young and energetic men and a few women clogged hospital morgues.

A bronze statue erected outside the stadium of a fan carrying another fan to safety with the inscription title, “I Am My Brother’s Keeper” in honour of the victims of that tragedy during.

Coach: Ernest Middendorf
The rivalry between Accra Hearts of Oak and Kumasi Asante Kotoko spans over half a century. Till date, it remains the biggest fixture on the Ghana football calendar despite both clubs losing their dominance in recent years.

May the Souls of all who lost their lives during the may 9 disaster Rest in Perfect peace. Never Again!!!!