Thomas Partey: Is Atletico Madrid Midfielder On The Verge Of Premier League Move? 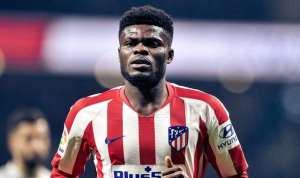 Thomas Partey is reportedly open to a move to Arsenal this summer, and it is clear to see why he is a player in such high demand.

The Daily Telegraph claimed this week that the Atletico Madrid midfielder has emerged as one of Arsenal's primary transfer targets as Mikel Arteta seeks to strengthen his midfield options.

The ongoing coronavirus pandemic will leave many clubs seeking suitable ways of structuring deals, but Partey's intentions and his reachable £45m buyout clause make him one of Europe's most sought-after players.

Talk of an imminent switch to the Gunners gathered momentum when Partey's father, Jacob, told Ghanaian radio station Entsie en Tru FM last month: "Arsenal would be good for him, they have lots of followers in Ghana. He'd been happy if he went to Arsenal".

Atletico are even willing to offer Partey double his current £65,000-a-week wages and are keen to insert a new £91m buyout clause in his contract to fend off interest from elsewhere.

Arsenal are not the only European club to have been linked with the player plucked from Ghanaian club Odometah FC in 2012. Juventus and Manchester United are also said to be paying close attention to developments.

With Partey's current Atletico contract still having three years to run, Sky Sports spoke to Spanish football expert Graham Hunter about the possibility of him moving to the Premier League.

Atletico accrued £178m in debt with Mexican billionaire Carlos Slim's company Inbursa in order to facilitate their move to the Wanda Metropolitano - and that is not due to be paid off in full until 2028.

Diego Simeone is the world's highest-paid manager, and while he has taken a 70 per cent pay cut from his £36.2m salary, Atletico will be feeling the financial strain of the pandemic more than most clubs - less than a year after Joao Felix's arrival for a club-record £113m from Benfica.

"Nobody knows how much clubs are going to lose financially in the current climate," Hunter began to Sky Sports.

"Atleti will have received a tremendous amount of money from a quite brilliant Champions League campaign but that has been curtailed. They would have expected to be playing in a Champions League semi-final match this week, and they'd have been paid more money by UEFA.

"I believe they're close to €70m ahead financially because of their participation and success in the Champions League this season due to the new funding structure which is so extraordinary.

"But their debt probably does mean a few clubs are going to be more fortunate going to Atleti and asking about some of their players than they would have been in other situations."

It was in the last significant match prior to football's shutdown that Marcos Llorente announced himself as Partey's potential successor. Llorente had only scored three career goals before his two in extra-time to knock defending champions Liverpool out of the Champions League.

Partey played in a deeper role to allow Llorente the freedom to join the attack, but Hunter believes his natural defensive qualities would soften the blow if Atletico were to sell their chief destroyer.

"From Atleti's side, although Partey has been for a long time a significantly important player, there is some degree of manoeuvrability because Marcos Llorente could come in. Partey is much happier sitting in an area, controlling the flow of games, blocking and building attacks again.

"Llorente is not an identical footballer - he's much more athletic and more prone to interceding in situations and he obviously scored crucial goals at Anfield. He is a player who stood out for Alaves on loan from Real Madrid and genuinely looked a top-class footballer there.

"When he went back to Real, I don't think anyone is sure why, in football terms, he and Zinedine Zidane didn't hit it off. Now, he's at Atleti going into his second season there and he is someone like Partey who's really learned from working under Diego Simeone.

"Partey's development under Simeone has been huge, and with Llorente there, Atletico need to consider whether they can afford to let their Ghanaian international go and gain financially from a deal to Arsenal. Without Llorente at the club, losing Partey would be significantly more testing for Atleti than it is right now."

Graphic courtesy of Statsbomb
Granit Xhaka could be the player in most danger of losing his place in Arteta's side were Partey to move to North London.

Arsenal would not turn to Partey for creativity from midfield if he were to join; Koke (46) and Hector Herrera (17) have created more chances than his 16 in La Liga.

Conversely, no midfielder in the Spanish top flight has received more yellow cards that the 26-year-old's 10, underlying his tenacious approach at the other end of the pitch.

"I don't imagine for a second that he grew up idolising Mikel Arteta, but because of the amount of English football that's shown in Ghana, and because of the role that Arteta played as a midfielder in the Premier League, I'm sure Partey will feel he would be working for a coach who would be able to educate him still further in the arts of organising the centre of midfield."

Like all aspects of life, football has been hit hard by the pandemic - and one area without exemption is player recruitment.

The financial significance is being felt to varying degrees depending on the size of the club and its financial model - and while Hunter believes there will be a "downsizing of overall outlay", Partey's reported £45m release clause makes him good value for money.

"Certainly, the transfer market will be determined by the impact the global shutdown has had and teams will have to tailor their expenditure in a different way given that for a long period they will have had less revenue.

"Clubs will be sensitive to the fact there's been a really grave impact on all our populations, but I think that football will continue respectfully. The difference in what clubs are going to want to spend on players will be governed by their own internal book-keeping, and I think there will be a downsizing of overall outlay.

"A lot of clubs won't be able to buy at margins that they previously thought were acceptable, just because they won't have the capacity that they expected to have.

Graphic courtesy of Statsbomb
"Partey still represents very good value given his buyout clause, something which is very normal in Spain. It's too low and Atletico were in discussions about extending his contract and increasing his buyout before the lockdown.

"This would have been beneficial for him and for the club and detrimental for a club like Arsenal. He's an extremely valuable and popular player for Atleti, having also played at centre-back and right-back under Simeone.

"In one game earlier this season, Partey was used as a second striker when Cholo [Simeone] was looking for a goal - a goal he would then help produce. He's a footballer who primarily plays in a similar position as Arteta and Simeone did, but he has flexibility that adds to his value when it comes to weighing up what should be spent on him."

It was reported last month by The Sun that Arsenal were willing to offer Alexandre Lacazette in a part-exchange deal, while there were further claims in Spain that the Frenchman had been in contact with Antoine Griezmann to request information about Simeone's management style.

Lacazette moved to deny those rumours this week on social media, and Hunter believes that while Atletico need to increase the number of goals in their team, the 28-year-old does not fit the club's striker profile.

"Right now, Atletico need the stability of a cash injection, and I think that would be more attractive on balance, but the current team's primary flaw at the moment is a lack of goals.

"It's something that has actually dogged them for some time: they've scored 31 goals in 27 league games - just over a goal a game.

"They still defend well, perhaps not quite as miserly as they used to, but Barcelona have scored more than double Atleti's goals [63] while Real Madrid [49] have got 18 more, so these are really significant numbers if you want to be challenging to win trophies and to be in the top four of La Liga.

"Atleti are currently outside of the top four only by a point, but to not get into the Champions League next season would be very debilitating for the club financially. There is a need for goals, and whether Lacazette has all the requisites and specifically has the right age profile is questionable.

"If you look at the majority of strikers they've purchased in their recent history, they tend to be in their very early 20s and they pick well. Lacazette has got the talent and the pace, there's no question about that, but whether he's what Atleti need right now with his salary, I'd be a little unsure."