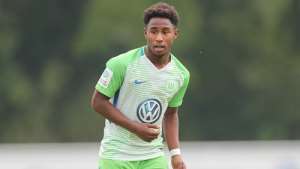 Ghanaian youngster, Yaw Yeboah says he is elated with his return to Wolfsburg.

The 19-year-old winger made 18 league appearances for VV Venlo this season, scoring one goal and providing one assist before the Dutch topflight was canceled last week due to the Coronavirus pandemic.

However, he has been recalled by Wolfsburg for their senior team next season and he is already looking to shine in their fold.

"I am already looking up to next season and I know what I can do at Wolfsburg, I cannot wait to get on the field," Yeboah told Sportbuzzer.

"I learnt a lot during my loan spell at VV Venlo and it was a good step for me. VV Venlo want to take me on loan again but I want to feature for the first team of my club Wolfsburg in the Bundesliga."

Yeboah was born in the German city of Hamburg to a Ghanaian father and an Ecuadorian mother and has progressed through all the age groups of Wolfsburg before being loaned to VV Venlo at the beginning if this season for the topflight experience.

He was part of the German national under-17 team which featured in the 2017 FIFA Under-17 World Cup in India.

Currently, he features for German under-19 team but still eligible to play for Ghana.