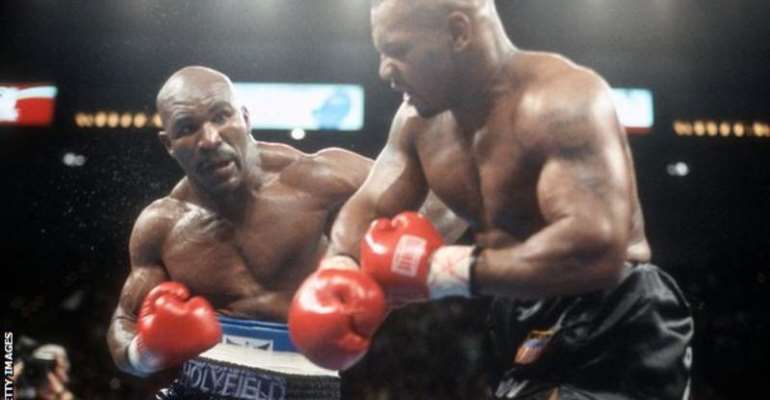 The rivalry between 'Real Deal' Evander Holyfield and 'Iron' Mike Tyson always felt as if it merited a trilogy of fights.

The pair have made us wait more than two decades since Holyfield claimed wins over 'the baddest man on the planet' in 1996 and 1997 but suddenly there is hope of a third hard-hitting and probably controversial affair.

Tyson, 53, wants to box again in charity matches and Holyfield, 57, has announced he will make a similar move.

"Are you ready? The moment you've all been waiting for... The Champ is back!" Holyfield posted on Twitter. "I'd like to announce that I will be making a comeback to the ring. I will be fighting in exhibition matches for a great cause.

"My name was made on fighting. It's time I bring that fighter out with the man I have always been. It's time to step up as citizens need help like never before."

Holyfield, a former undisputed champion at cruiserweight and heavyweight, is raising money for Unite4OurFight, a charity that helps learning and emotional development projects aimed at children whose schooling was disrupted by the coronavirus pandemic.

Tyson, the youngest heavyweight world champion in history, revealed he is planning his own return to the ring for charity in a podcast with rapper T.I.

If anyone doubted his statement that he had been "hitting the mitts", Tyson posted a video of him performing pad work, prompting an outpouring of praise from boxers, film stars and, well, pretty much everybody.

Holyfield has been out of the ring since 2001 and Tyson since 2005. That may not be ideal for sharpness - and the fact they have a combined age of 110 is also not perfect. But it would still be fun, right?

Their two fights generated in excess of $200m in total across 1996 and 1997. In the second encounter, Tyson bit the ear of his rival, prompting a disqualification.

A small part of Holyfield's ear was placed in an ice bucket but lost on the way to a Las Vegas hospital and while Tyson was not all too remorseful initially, he said sorry when the dust settled.

"I just snapped," he said two days later. "I couldn't tell you why I acted exactly as I did."

It feels as if this one needs a nicer ending. Where better than in a ring for charity? Does anyone else fancy it? Or is our judgment a little off given we may have been starved of boxing and sport for a little too long?