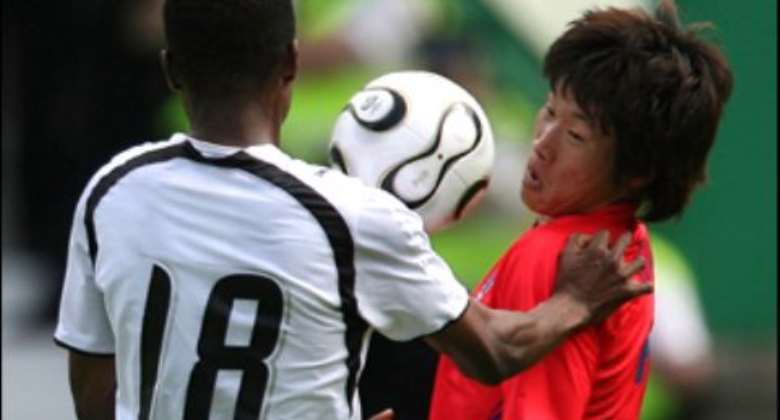 After a first half 1-0 lead, Sulley Muntari and Michael Essien scored for Ghana after the break lifting the World Cup debutant over the 2002 World Cup semifinalist, whose Lee Eul-yong scored in the match.

In the four friendlies leading into the World Cup next week, Dick Advocaat's squad recorded one win, one loss and two draws. The Ghana match is South Korean team's first loss since the Feb. 11 game against Costa Rica. The squad moves to Cologne, Germany, today, two days before the World Cup opening.

Korea fielded its top players, many of whom were kept sidelined in Thursday's Norway match. Park Ji-sung, Lee Eul-yong in the midfield and Lee Chun-soo up front saw action.

The teams initially appeared well-matched but Ghana seized the initiative, controlling the game. At the 16-minute mark, Essien nearly scored on a drive. That play was followed by another threat from the Africans on a right-footer by Sulley Montari, which sailed over the bar two-minutes later.

South Korea nearly went one goal up in the 21st minute when Lee Ho volleyed a rebound as the Ghanaian side tried to clear with a header. The ball was deflected off Ahn Jung-hwan's leg but was scooped up by Ghana goalkeeper Richard Kingston. Three minutes later, Lee Young-pyo sent a sharp cross from the left after some fancy footwork but Ahn's header went wide, right of the net.

After Stephen Appiah drove a couple of unsuccessful shots toward the Korean goal, a poor Korean defense gave Ghana an early lead. Kim Jin-kyu dived to clear a John Pantsil cross from the right, but Kim ended up handling it, allowing a penalty. Gyan made no mistake, slamming it into the left side of the net past a futile dive by goalkeeper Lee Woon-jae.

Five minutes into the second half, Lee Eul-yong converted to even the match at 1-1. Lee, who plays for the Turkish club Trabzonspor, brought the ball up slowly into Ghana's midfield then abruptly blasted a long-range shot, beating substitute goalkeeper Sammy Adjei.

Ghana then started to push Korea hard again with shifty and short forward passes. It eventually paid off in the 62nd minute with a goal by Muntari, who plays in the Italian league for Udinese. At the foot of the penalty box, he headed home an Essien free kick, easily beating the Korean goalkeeper.

South Korea had an opportunity eight minutes later. Park Ji-sung headed off a Lee Chun-soo corner near the right post, but it went just over the bar.

Ghana again scored in the 80th. Essien sent a cross from the right to Gyan, who heeled it back from right in front of the goal line to an inrushing and unchecked Essien. The Chelsea star easily put it inside the near post.