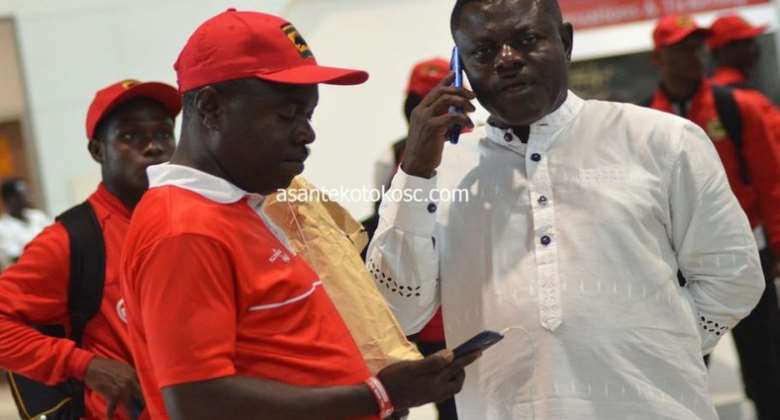 The management of Asante Kotoko Sporting Club Limited has expressed gratitude to CLOSEmarking Consult for the role it played in the amicable settlement of their dispute with Esperance Sportive de Tunis last week.

A statement signed by the Executive Chairman of Kotoko, Dr Kwame Kyei, and addressed to the Chief Executive Officer of CLOSEmarking Consult, Mr Ashford Tettey Oku, on May 1, 2020, said: "the Executive Chairman, Management and the entire team of Asante Kotoko SC wish to express our deepest appreciation to you and your consult."

"We are particularly grateful to you, Mr Ashford Tettey Oku, for the role you played which ensured the peaceful and amicable settlement between our club and Esperance Sportive de Tunis."

The statement said Kotoko were eternally grateful to Mr Oku and assured him of the future cooperation between Kotoko and his outfit.

"We are eternally grateful to you and assure you of future cooperation between you and Asante Kotoko SC," the statement concluded.

It will be recalled that Kotoko's representative, CLOSEmarking Consult, facilitated the signing of a settlement agreement between the Ghanaian side and Esperance in respect of a $240,000 FIFA fine involving Emmanuel Clottey and the $150,000 transfer fee of Kwame Bonsu on April 24, 2020.

Meanwhile, the management of Esperance have taken steps to get FIFA to discontinue the case scheduled for hearing at the FIFA Players’ Status Committee adjudication session tomorrow.

Esperance and Kotoko reached an amicable settlement in respect of the case involving Clottey and Bonsu on April 24, 2020, and accordingly filed the settlement agreement at FIFA on April 28, 2020, to signify the end of the dispute.

And in response to a notification to the two clubs with regard to tomorrow’s hearing signed by the Head of Players’ Status at FIFA, Erika Montemor Ferreira, dated April 29, 2020, the Secretary-General of Esperance, Mohammed Farouk Kattou, stressed in a letter dated May 2, 2020, that the two parties actually signed an agreement on April 24, 2020, for the amicable settlement of the case.

“We have received a notification informing us that the matter cited above has been brought before the single judge for hearing on May 5, 2020.

However, it turns out that the two parties signed an agreement dated April 24, 2020, for the amicable settlement of the case, including a comprehensive agreement concerning two pending cases, thereby putting an end to any dispute between them after having set off the two debts with a gain of $30,000 that our club has already received as it appears from the agreement,” he explained.

“We would be grateful if you would take into consideration the terms of the agreement between the two parties,” the letter concluded.

It will be recalled that Kotoko’s Executive Chairman, Dr Kwame Kyei, and Mohammed Farouk Kattou of Esperance signed a settlement agreement last week to mark the end of a protracted dispute between the two sides after the Tunisian side agreed to receive the payment of $30,000 from Kotoko being the difference between the $180,000 FIFA fine for the wrongful use of Emmanuel Clottey and Kwame Bonsu’s transfer fee of $150,000.

As part of the successful arbitration facilitated by Ashford Tettey Oku on behalf of Kotoko, Esperance waived their $45,000 interest and only asked the Ghanaian side to settle the $15,000 legal fees owed FIFA in connection with the case.