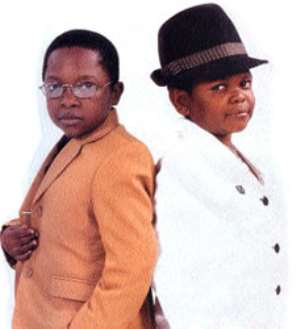 They both have tiny frames but they are giants in their chosen career. Aki and Pawpaw are the petit Nollywood stars who have turned their physical disabilities into creative tools in the entrtainment industry. The two actors, who are usually paired for roles in movies, recently spoke about their sojourn in the Nollywood including their brotherly bond and their budding romances.

Aki Chinedu Ikedieze (aka Aki) is 29, he is the first and the older of the Aki and Pawpaw duo. The talented actor, who hails from Abia state, is the only short child among the nine children of his parents. He attended Institute of Management and Technology (IMT) Enugu where he studied Mass Communication although he had nursed an ambition of studying Law.

The actor started exhibiting his acting skills at the institute’s dramatic society where he acted in a small dramatic sketch, and was later inspired to participate actively in dramatic activities. After leaving school, Aki auditioned for a role in the film, Evil Men in 1998, and he was selected and paid N500 for his role. Other roles followed in quick succession, even as Aki gradually started demanding higher rates for his acting skills. Today, Aki and Pawpaw are reportedly the highest paid actors in Nollywood, charging as much as N300, 000 each for guest appearances, N50, 000 to N100, 000 for brief performances and N1.7million for a full length film.

Aki said he and Pawpaw have also performed in Brussels, Ghana, Germany, America, Italy and Sierra Leone among other countries. According to him, whoever hires them for overseas show must be ready to pay good money.

Aki recently got engaged to his girlfriend, Nora Mokwunye, and described her as a tall, beautiful, easy-going and straightforward woman. He added that their difference in height has not affected their relationship. The actor plans to run a Master’s degree programme in International Relations as well as set up an International production studio in Nigeria.

Pawpaw Osita Kenneth Iheme (akaPawpaw) is just 21 and a native of Mbaitolu in Imo state. He is the youngest of five siblings. Like Aki, Pawpaw is equally the only member of his family who is short. According to him, while growing up, he did not feel in any way different from others. After completing his high school education, he worked for a while in a designer’s shop near his parents’ house. In 2001, he auditioned for a part in the movie Cold Blood and succeeded. He was then paid N5, 000 for his supporting role and since then, he has been making waves in the industry.

Pawpaw looks forward to a brighter future in Hollywood. He also publishes a magazine called ,Nollywood Guide which deals with movies and artistes. On his love life, Pawpaw said he has a girlfriend but will not reveal her identity yet.

The Nollywood twins met each other at an audition in 2001 and since then, they have become inseparable friends. Both of them said they are more like brothers than colleagues as they share the same flat, height, weight and talent, so either both of them are cast in a movie or neither. They first paired in Aki Na Ukwa and their performance in that film took them to the limelight.

In September 2004, Aki and Pawpaw went to America’s New York Film Academy to brush up their acting dexterities. According to them, they studied for 10 hours per day and they spent 12 weeks there, it was very intense and tremendously rewarding, we learnt a great deal, they said. We were just thankful for the opportunity fame has given us to travel around the globe to meet role models like Will Smith, Eddie Murphy, and Gary Coleman among others.

In the case of these indispensable actors, shortness is deceptive, According to them they said there are so many tall people who do not have talent.