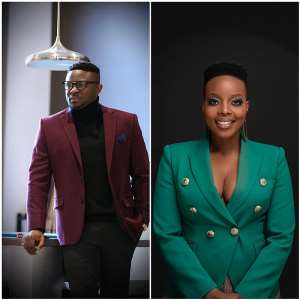 On the occasion of the sixty-sixth session of the United Nations commission on the status of women which is being held in New York, the African Renaissance And Diaspora Network (ARDN) has appointed South African music star Nomcebo Zikode and media executive Timothy Kublenu Akeju as goodwill ambassadors for the campaign to give a red card to all forms of discrimination and Violence against women and girls.

The ARDN red card campaign uses the convening powers of sports and cultures to achieve gender equality and the empowerment of women.

It also aims to obtain over 1 million commitments throughout the globe during the upcoming FIFA World Cup in November 2022 in Qatar. The Campaign is within the framework of Pathway to Solutions, a special project spearheaded by ARDN for the United Nations to popularize the sustainable development goals by 2030.

"We are honored to welcome Nomcebo and Akeju to ARDN, to further strengthen our efforts in this regard, especially since they both so dramatically epitomize the notion of African Renaissance while, at the same time, inspiring those of the Diaspora".

Adding “ We’ve got to fight the Apartheid of Gender as forcefully as we fought Apartheid in South Africa.

We aim to see a world where everyone is cherished, regardless of gender, culture, color, language, social origin, birth, property or religion".

Busie Matsiko-Andan, special advisor on private sector development and celebrity outreach to ARDN also expressed enthusiasm for the direction of the red card campaign and its new goodwill ambassadors, Nomcebo Zikode and Akeju who she described as great additions to the campaign.

“Akeju and Nomcebo are in the business of creating impact and transforming lives, I am hopeful that their addition will continue to raise awareness to this campaign. I am truly happy”, she said.

Nomcebo is the personification of the artistic and cultural richness of Africa so much that her enormous hit track with Master KG titled " Jerusalema" is being heralded as the "Anthem" for Africa.

The other ambassador, Akeju is the CEO and President of Aflik TV, one of the largest producers and distributors of Nollywood films and African-inspired contents. As a Board Member for New York City Times Square Billboards, Akeju has been instrumental in providing placement on the Billboard for Afrobeats artists.

The two new ambassadors will join many distinguished performers, athletes, and globally recognized leaders who, as goodwill ambassadors for ARDN and the United Nations, are lending their influence, talents and ideas to popularize the sustainable development goals in communities across the globe.

Latest Photo Reports
Catch up with all the political quotes from our politicians.
Advertise here
More from Nollywood Media
ModernGhana Links
CLIMA Africa Awards 2022 Nominees List Is Out!
"Bobrisky never really made me” James Brown talks about her relationship with Bobrisky, going to prison, and future aspirations #WithChude
US based Nigerian author, Chinwe Esimai releases new book, Brilliance Beyond Borders
TOP STORIES

'My Ga, Fante, Ewe and Northern brothers when was the last t...
30 minutes ago