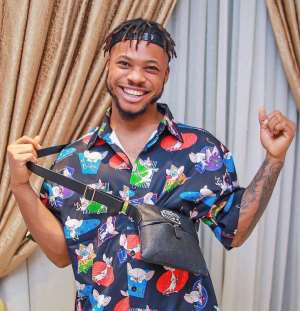 Declination - flash fall from glory is a no prayer point for any artiste, especially, artistes who just had their ways to limelight. This, over the years, has been a reason newbie artistes choicelessly maintain silence, even when their rights get usurped by their records label, boss, or promoters. For, standing to claim their rights at early stage of their career could halt their music glory and revert them to nothingness. But for Habeeb Okikiola, it seem a different case as he "unbotheredly" challenged Pocolee, a professional dancer who also played a significant role in his journey to stardom.

Iwe Pascal, popularly known as Pocolee was accused of pilfering by Portable, after the dancer handed $600 to Portable out of the $3000 singer Wizkid gifted him (Portable) at a Wizkid's show they both attended to perform. Pocolee's expectation that Portable won't be bothered about the money may have failed him, but the Zazoo crooner chose to speak up in a controversial video many music fans opined was wrong. Just when everyone thought Portable would make a pause after that very accusation, he further lamented the dancer's cheat in a way Pocolee uploaded his song, Zazoo, on streaming platforms. A carefree Portable wanted his name to appear first on the song, since the song was originally his and Pocolee only played a promotional role. A random newbie artiste would have been scared to call out Pocolee, but for Portable, his stance was clear from the onset and and he had lain bare, a firm truth that, helping people should not be a gainsay for anyone to usurp the rights of those they help. In an interview with Jahbless Original, the Sango-Ota born artiste said, "Tell a scammer I know you're a scammer, but don't scam me. He won't scam you. That's why I came to the industry with madness, so no one will try to jeopardize my rights."

Laying bare the second truth, Portable took a cutting tongue after Kogbagidi - the show promoter who aided his performances at different music shows of top artistes. Kogbagidi, a successful show promoter had wanted Portable to act calm against his noisy style. Portable, however, resented and made his choice clear as a noisy artiste who is ready to make much noise about his craft. He stood by this and refused to bow to pressure, and just so well has he been doing, that he had boosted the confidence of some new artistes not to bow to pressure that goes against their choice, especially when they feel it would help their craft.

Moving forward, Kogbagidi (Promoter) had also wanted Portable to deter from another Kogbagidi (Lavish Funds) - a young rich Lagos man who had helped singer Portable when he was not known and only fighting his way to limelight. The rich young Kogbagidi was said by Portable to have helped him with money when he was still struggling that he made several fund transfer like ₦50,000, ₦100,00 and even more just to aid Portable's music career. But Kogbagidi (promoter) reportedly seek every means to stop Portable from Kogbagidi (Lavish Funds) since, he (Portable) is now rich. Portable, however, refused and laid bare, another truth that fame should not hinder one from relating with people who were there for one in time of hardship.

Several motivational speakers and words have admonished young men to face their financial game and stop being bothered about ladies, as the ladies they run after would run after them once they attain success. Portable was an affirmation to this. With his raggedy appearance, he might have been rejected by ladies when he was poor, but ever since he became successful, he had turn a toast of many ladies that he takes big girls to bed and put their moments together on video record. "After Biscuits, Na Toto cheap pass" Portable had said in one of his many careless talks. Although, I may not fully align with his assertion, but a bitter fact had been lain bare by him, that young men only need take their financial life serious, at the instance of success, even the big ladies whose attention they desperately seek would run after them - and this, is regardless of their looks or behaviours.

Unlike celebrities who deter themselves from their one-time lovers, especially, the ones who had endured and supported them in hard times, Portable chose to tread a different path, that he said in an interview with Boomplay, he would get married to his longtime girlfriend because she had suffered with him. "E get girl wey I wan marry because she dun follow me suffer". This sent emotion down the spine, for Portable is a grateful soul who never took favours once rendered to him with levity, unlike other artistes like the talented Buju, whose ex-lover, Amira, called out because he no longer relate with her, despite that she was there for him and even "paid for most of the clothes he wears and food he eats through his manager, Tomiwa Agbaje" but get dumped at the Buju's attainment of fame. Portable, however, rather passed another silent message that fame shouldn't becloud one's sense from relating with one's longtime lover, especially, a worthy lover who believed in one and supported one's dream.

That the world would blend along with one's condition when they seek benefit from one was another truth silently passed by Portable when Boomplay, a music-driven brand widely-known for interviewing artistes in English Language blended their style for Portable, just to have him interviewed in Yoruba Language. The bragging right to have interviewed a celebrity Portable, the more awareness of their brand and the streaming income were benefits they sought from Portable, hence they neglected the fact that he couldn't speak English Language and granted him the chance to be interviewed in Yoruba Language. Truly, when the world seek benefits from you, they would go out of their norms just to get what they want from you.

Nigerian Youths with the get-rich-quick syndrome may not find Portable's word suiting that "God's time is never late". The artiste had advised young men to stay firm amid rigours and trust God in all situation. Recounting how he had spent 10 years singing and released 400+ songs before destiny finally beamed a smile on him, he said, "Omo oro loun di hero" It's only a strong person who becomes hero. Another silent message he passed, standing tall amid unfavourable moments and trusting God's plan, in both sweet and bitter moments.

Paying less attention to naysayers hurt naysayers more than giving them attention. Despite that she later came out to debunk the accusation, the stripper who called Portable out for impregnating her had planned to soil Portable's name, but that Portable gave her no attention hurt her and the ones who may have sent her the devilish claim, that she later debunked it as mere joke. Portable knew naysayers would triumph when they get attention, he hence chose to be unbothered and followed Matshona Dhliwayo's words that, "If you listen to critics for too long, you will become deaf to success."

The above and many other silent truths, Portable had manged to pass. However, I wish the controversial singer retrace some of his steps and make amendments. Vulgar and indecent lyrics has a limit it could take one. He could join list of well-meaning artistes who pass good messages to the world and still rake in better income from his craft. Also, harassing females sexually should be the least thing to visit anyone's mind, let to talk of a newbie artiste. Although, he had apologized, but what he and his guys did to the Kenyan YouTuber, Peris Mumo, who approached him for interview but was rather subjected to sexual harassment was sickening and should not even repeat itself.

Bringing this to a close, I would advise him to watch his squad as it appears some of them meant no good for him. Recording his misgivings at every instance and sending it on social media could be harmful to his music career. It seem Portable has a long way to go, but then, as he continues to pass silent messages, I also hope he also retrace some of his steps too. For, only good things last long. There's a limit to what unmeaning actions could take one.