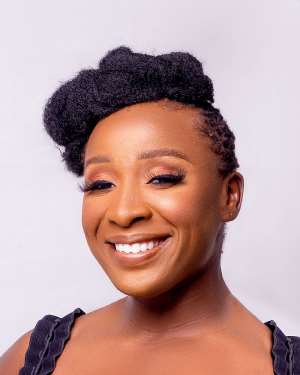 Ghanaian actress and media personality Naa Ashorkor fell in love with Enyonam, her character in Akwaaba Magic’s drama series To Have and to Hold , the moment she heard about her.

She was also drawn in by the special bond between her character and her two friends – Akosua (Lydia Forson) and Kuukua (Zynnel Zuh) - because it dispelled society’s narrative of pitting women against each other. Instead To Have and To Hold highlights the female experience in Ghana, and gives voice to very important issues that are “difficult to have and even more difficult to admit” as Ashorkor puts it.

She admits that she’d like to see more of such stories on Ghanaian TV, especially the ones that speak on mental health among young people. “It's an uncomfortable topic, but it’s a real challenge many young adults are battling with now,” she says.

In the interview below, Ashorkor also talks more about her character, what it means to feature in one of the most-watched shows on Showmax in Ghana, the highlight of her 13-years acting career and more.

What did you think of Enyonam when you first heard about this role?

I fell in love with Enyonam from day one mostly because of her commitment to her husband, irrespective of the challenges they had. She had rich friends, she knew what a “good life” looked like, yet she stayed true to love - until he let her down of course.

I also loved the sisterhood the girls share. There are many narratives in the media these days pitting girls against each other. It's pretty cool to see a story where girls show up for each other and have each other's back.

Do you have friends like Akosua and Kuukua in real life?

Yes. As a child, I remember having so many aunties who weren’t related to my mother. Those were her girls, who stuck by her at all times. I learnt the importance of these bonds very early in life, so yes, I have friends like Akosua and Kuukua in real life.

To Have and To Hold is one of the most-watched shows on Showmax in Ghana. How does this make you feel?

Amazing, feels good to be part of the winning team. We put in a lot to make this project successful. We worked hard on this project! I am happy Ghanaians love it.

The show highlights the female experience in the modern world by tackling important issues such as surrogacy, physical abuse and sexual harassment. How does it feel to be part of it?

Shows like THTH mirror society. The stories are a reflection of the realities of many women in our society. Some of these conversations are difficult to have, and even more difficult to admit. It feels good to be a part of this show because it tackles the “hard stuff”.

What stories would you like to see told more on Ghanaian TV?

I’d like to see more films that speak to mental health challenges in young people. It's an uncomfortable topic, but it’s a real challenge many young adults are battling with now.

Were there any instances where you saw yourself in Enyonam’s experiences?

Yes! She's an amazing friend and I’d like to think of myself as one.

Enyonam has been so unlucky in relationships. Where would you want to see her story go in season two? Would you want her and Nii (Adjetey Anang) to get back together?

Yessssss. Nii is the love of her life and everyone deserves real love. Love conquers all - or it should. Also, Nii is a good man. I’m hoping they come back together.

How was it acting alongside Adjetey Anang?
Adjetey is every actor’s dream co-star. I always enjoy working with him. He’s very professional. Our scenes together were very easy and exciting.

How about sharing the screen again with Lydia Forson?

I love Lydia with all my heart. It's always a real delight to work with her. Sometimes, we forgot we were acting!

What’s the biggest lesson you’ve learnt from your character in Season 1?

Good people make mistakes too and that does not make them bad. When Enyonam fell for another man (Steve played by Prince David Osei), it broke my heart. But I guess that’s a lesson worth learning: no one is perfect.

You’ve been acting for 13 years, which role would you say has been the highlight of your acting career?

Playing Akasi in the film The Perfect Picture. It gave birth to my career in acting. It was my first major role and so many years later, I’d say it's the major reference point for most people who write about my acting.

Binge all 26 episodes of To Have and To Hold S1 on Showmax.