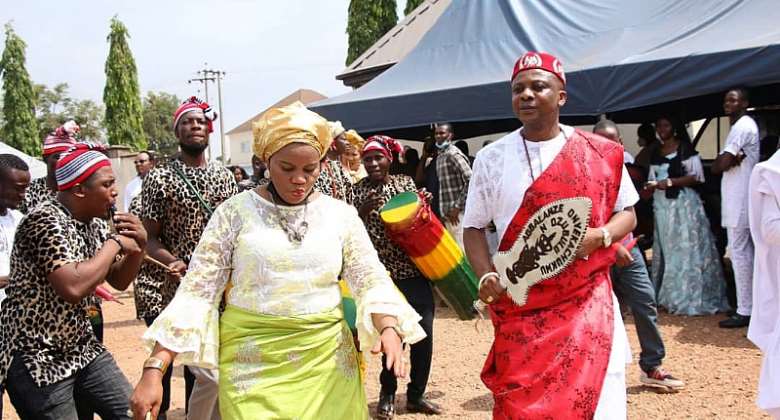 It was a spectacle to behold as the Igbo in Abuja, last week turned out in large numbers to mark Igbo Cultural Day in St. Christopher Catholic Church Games Village.

The convergence of Igbo communities in the church premises to celebrate this year’s Igbo Day was a colourful event targeted at showcasing the cultural ingenuity of Ndigbo to the world.

Dignitaries from wide and near graced the momentous event, which historically has been one of the most consistent and colourful of all cultural outings in Abuja.

One of the notable dignitaries, managing Director & CEO of Diamond Leeds LTD, High Chief Kenneth Ifekudu (Agbalanze Onyekachukwu na Ozubulu) observed that the event has as part of its objectives to build bridges of national unity and create a culture of peace amongst Igbo diverse interests and groups in Abuja and beyond. It also aims at creating a platform for the creation of formidable networks, harmonious relationships and good neighbourliness among Ndi’Igbo and their host communities globally.

The event serves as a means of developing opportunities for the youths to learn and practice Igbo culture and values. This is in addition to encouraging philanthropy and reward those who distinguished themselves locally and internationally through awards and motivate them to do more.

Ifekudu said: “Some of the objectives include the need to build latent talents and brainstorm for the development of Ndi’Igbo in Abuja, and to sustain the germane Igbo day cultural history and memorials.”

The carnival-like event featured festivities of music, arts and culture with the sole aim of promoting the cultural heritage of Igbo.

On his part, High. Chief Kenneth Ifekudu, also described the event as remarkable, saying it would make a great impact on the lives of the church members. He also advised parents to encourage their children speak their various mother tongues.

The carnival attracted large crowd of spectators and participants from the FCT and beyond. It might have achieved the aim of engaging the youths in productive and result-oriented activities. It attracted a mass movement of people of Igbo origin within the country and those in the Diaspora who turned up to unite and celebrate the rich cultural heritage of the Igbo people while prizes were also won by various people at the event.

Latest Photo Reports
Catch up with all the political quotes from our politicians.
Advertise here
More from Nollywood Media
ModernGhana Links
CLIMA Africa Awards 2022 Nominees List Is Out!
"Bobrisky never really made me” James Brown talks about her relationship with Bobrisky, going to prison, and future aspirations #WithChude
African Renaissance and Diaspora Network appoints Nomcebo and Akejuas ambassadors
TOP STORIES

‘You got it all wrong’ – Chamber of Freight & Trade criticis...
2 hours ago