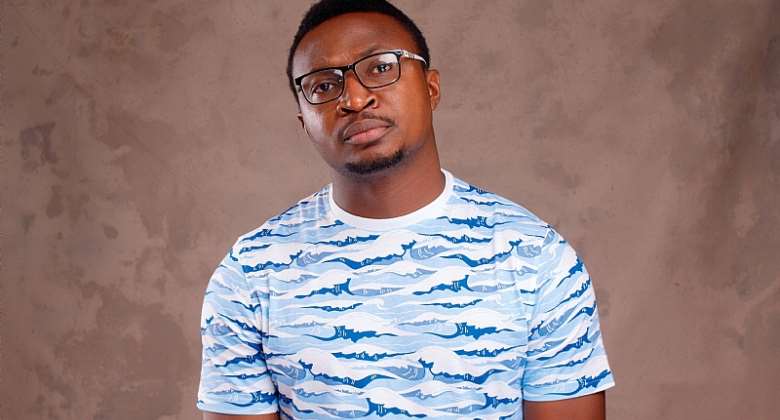 From doing stand-up comedy to hosting events, acting to everything in between, Funnybone is all about the entertainment hustle and loving every minute of it.

The AMVCA-award winning actor is one of the lead acts in the latest Showmax Original, Ghana Jollof, where he plays a “first-class graduate” who moves to Ghana in search of greener pastures after failing to secure a job in Nigeria.

In this exclusive chat, the funnyman talks working with Ghanaian actress Joselyn Dumas for the first time, what he gets up to when he’s not cracking jokes, plus who he’s calling if he gets arrested by the police!

Tell us about your character in Ghana Jollof.
Jasper is a nerd and ‘supposed first-class student’, verbally, though not on paper. He’s friends with Kweku and Romanus [played by James Gardiner and Akah Nnani] whom he met in university and who helped get him to Accra. Jasper is caught in the emotional triangle between Abena and Jackie [played by Joselyn Dumas and Brihanna Kinte], who are both employees at Kweku’s company. He’s very laid back, funny and an absolute pain in Kweku’s behind.

Any similarities between yourself and the character you play?

I share Jasper's humour in real life but I’m not a nerd. I’m also intelligent like Jasper but I’m not a first-class student because I cannot kill myself.

How did you land the role?
Right after the AMVCA, Basketmouth told me he had something he would like us to do together and that was it. About eight months later, he gave me the script to read and asked me to come through so we could discuss it. As someone I had worked with for a long time, I think he understood what I could do, and my range. The role challenged me but I liked it because it’s my first time doing drama and not just sitcoms. Sitcoms come naturally to me, unlike drama where I have to be serious and funny at the same time.

What was it like working with Joselyn Dumas for the first time?

It was actually my first time being in a romantic space with a female on set. I’d never done scenes where I had to kiss or hug somebody. But shout out to Joselyn for her skill and professionalism. She gave me the vibe and energy I needed to make the scene work. She would say to me, ‘Calm down’. If it was someone else, I probably would not have done that scene as well as I did it. She gave me the freedom I needed. But on the whole, Joselyn is really cool, when she walks into the room, it’s all good vibes, she’s smiling, talking to you, and wants you to be on the same wavelength as her. She earned my respect for life.

Where do you feel most at home - doing stand-up comedy or acting?

That’s a tough one. I’m actually a thespian by training. Acting is fun but it’s really stressful. With comedy, I just need to prep myself mentally, get ready for my audience and in less than an hour I’m done with my set. But with acting you can shoot for days on end with early morning call times. The passion is there but I think stand up is my first love. I express myself with no limit. That's where I find peace as a person.

What do you want fans to take away from your performance in Ghana Jollof?

This is my first time doing something that will involve Nigerians and Ghanaians at the same time, so that for me is pushing my craft beyond my borders, which was selling for me as a person. When you watch this, try not to see me as Funnybone or a comedian, go with the drama. There’s a story on a journey. The humour will help you garnish the entire process.

Tell us something about Ghanaians you’ve learnt?

They’re not in a hurry like we are. If I was in Ghana, I wouldn't be complaining about a 6am call time, whereas in Lagos, you could shoot from 5am till the next day. Ghanaians are chill; they take their time.

Which of your cast members are you calling if you get arrested by the police?

Tell us something about yourself that people don’t know.

I like to be in my lane. If I wasn’t filming or out working I’d be home with the AC and TV on while watching something or just sleeping.

Ghana Jollof is available to stream exclusively on Showmax with new episodes dropping every Friday.