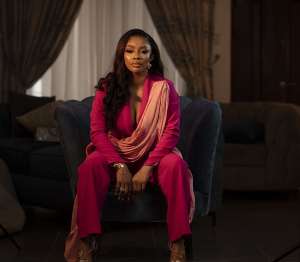 Toke Makinwa is no stranger to making headlines. Since her early days in radio back in 2010, Toke has kept Nigerians entertained both on and off the air.

Ahead of the launch on 3 August of her brand-new show, BBN S6: The Buzz, where she’ll be talking all things BBNaija, we caught up with the media personality for an exclusive chat. She spilled the tea on her favourite ex-BBNaija housemates, remaining relevant in the entertainment industry, and what to expect on BBN S6: The Buzz, which streams exclusively on Showmax.

What ex-BBNaija housemate did you connect with the most while they were in the house?

Bisola. Everyone in my household made me fall in love with her; they would use all their money to vote for her. My cook is her biggest fan and when she came out of the house, they actually met. Bisola was so kind to do that. I loved how real and funny she was; she was the life of the party. So Bisola is one of the ex-housemates I can’t really get over quickly.

Apart from her, I’d say CeeC because I think she was misjudged a lot. I remember that famous scene that went down when she fell out with Tobi, and everyone had something to say. I realised that the difference between her and most women who were speaking was the cameras, because we’ve all kind of been there, to be honest. We’ve all had moments when we’ve lost it. I also felt like she had a bit of social anxiety, and when you come across people with social anxiety, you almost think they’re rude and snobbish but they’re not. It’s just because they’re awkward when they’re around a lot of people. It’s interesting to see how far she’s come and how much she’s grown into her own person - she was definitely someone I enjoyed.

I also enjoyed Tboss. I just loved the fact that she could say things like ‘the guys in this house are not on my level’; she was entertaining. Tacha was entertaining as well; I love people who own their personality.

What kind of BBNaija housemate would you be?

I don’t think I would ever go for the show but if I did, I think I’d be a sh*t stirrer. I’d definitely be in everyone’s business. I think I’d just be annoying because no one knows that side of me. I’d hide people’s stuff and instigate quarrels because that’s why we’re there. I’d just be messy to the core. I might get evicted in three weeks because there’d be fights every other night. I don’t think I’d have sex on camera though, because my mum’s watching and I don’t know if I could deal with that, but I definitely know I’d be a crazy housemate.

Who’s Toke beneath all the fame?

Nobody knows me and I think I like it that way. I like the different versions of me that people have in their minds and I don’t argue with them. If you think she’s crazy, yeah, I’m crazy; if you think she’s nice, she’s nice, because I think life is too short to go around explaining myself to people. Those who genuinely care about me don’t care about what others say, and those who don’t will never believe you anyways.

I’ve also grown over the years, so what I was five years ago might not necessarily be what I am now. So I think Toke is a girl who’s discovering life on her own terms. She can never be put in a box because she’s very curious. I’ve got a very inquisitive mind. I’m always trying to learn and expand my knowledge and growth, and just strive to evolve as a human being because I think that’s why we’re here. So I can’t tell you for certain who Toke is because she’s still trying to discover herself, but she’s having a hell of a ride.

What misconception about yourself would change if you could?

I don’t think I’ll change anything because I think what’s funny is when people get to know me, the first thing they say is, ‘Oh, I never knew you were this nice’ and I always think, ‘How do you judge a book by its cover?’, though we’re all guilty of it.

What was a career-defining moment for you?

I’ve had so many moments but I would like to think that being able to transcend beyond just one thing has been key for me. I started out on radio, then YouTube came, then television, movies and then I wrote a book and I’ve launched two businesses and much more. So I think defining moments for me would be different boxes I’ve been able to tick because I feel like I don’t even set out to do these things, but I just find myself being curious and wanting more.

So as a radio presenter I loved radio, I’m still on radio but I wanted to acquire more knowledge and do something else, then I found YouTube, and I was crazy about it. The versatility in the brand I’ve been able to build even when I didn’t think I was building a brand has been defining for me.

I was just this girl who was doing what she loved to do, and as the years went by it became something that people just couldn’t get enough of.

What does hard work mean for Toke?

Hard work involves a lot of sacrifice at any level. Whether you’re in uni, starting a business or you’ve already formed the business, you’re always going to have to sacrifice something for the greater gain. The moment you feel comfortable, you’re on your way out. You have to be passionate enough and have enough conviction in what you’re doing.

Hard work is about consistency. I tell people that I learn a lot more from my failures than my success because success is great, but you learn a lot from those nights when you’re holding on for dear life because if this doesn’t work, you’re going back to the village.

So I’d say sacrifice is at the top of my list - what are you willing to sacrifice for what you want? If you spend 12 hours watching TV, maybe cut down to eight and spend the remaining hours working on your goals. If you suffer from social anxiety maybe read books, watch movies, talk to strangers so you can break through. Never stop working on yourself.

Even Bill Gates, with all the money he has, is still working on himself. If he can work on himself, who am I?

What hat do you enjoy wearing the most - radio, TV, YouTube, acting or businesswoman?

Radio is my first love and always will be. Radio found me when I was nobody. Radio and I go way back to when I was 19, which was when I had my first radio stint. Radio grew with me and gave me many other opportunities, so it will always be my first love.

What’s your secret to staying relevant in the entertainment industry?

Also the fact that I’m very vocal and just say what I think. I think people are afraid of that here, so they’ll never really like you, but they can never stop following you because they’re afraid that they’ll miss out on what’s going on next but I welcome everyone.

What can fans expect from you on BBN S6: The Buzz on Showmax?

I’m looking forward to laughter, tears and the Saturday night parties, and to them misbehaving because that way we get a lot to talk about.

Are we getting a follow-up book?

My follow-up book has been ready; I’ve just been looking for the right time to release it. It was supposed to come before Covid, and then Covid happened and I wondered if it would be a good time to drop a book because I can’t go on a tour. The world opened up and then I started my movie career.

I know I’m going to drop it before the end of the year, but it will happen when no one sees it coming. This second book is about my life and work. I didn’t talk a lot about my work in the first book because I was still building, but I think I have enough recipes that I can share with people now.

Hottest Photo Reports
Catch up with all the political quotes from our politicians.
Advertise here
More from Interviews
ModernGhana Links
“It is more than acting for me because I see him as my son”, Sola Sobowale and Titi Kuti share about their relationship on #WithChude
Paul Okoye: Family, Legacy, Rudeboy
20 Years Of Promoting Nollywood Films, African Music Culture In Europe, Isaac Izoya Speaks
TOP STORIES